It has been that kind of spring… a month ago Ottawa Race Weekend was so hot they had to change the start times and two weeks ago Rideau lakes Cycle Tour was so cold, windy and wet I rode in a raincoat, hat, full fingered gloves, booties and leg warmers. In the days leading up to IM70.3 Mt Tremblant the temperature just kept going up. When I was packing a bag on Friday the forecast temperature was 31C so I packed my arm coolers but Rideau Lakes was still on my mind so I brought a raincoat too, just in case. I did leave the booties behind!

We drove to Tremblant on Friday afternoon. It was over 30C and the Air Conditioning in our van does not work. We let lots of air out of the bike tires and told ourselves it was good heat training as we stuck to the seats. We managed to get to the village in time to do athlete check in Friday night.

The line was long but not too horrendous. I was a bit surprised when they really did want to see my OHIP card at registration. Tremblant does a lot of little things to make this event as good as it is. As we left check in we were all given Strawberries which were excellent. 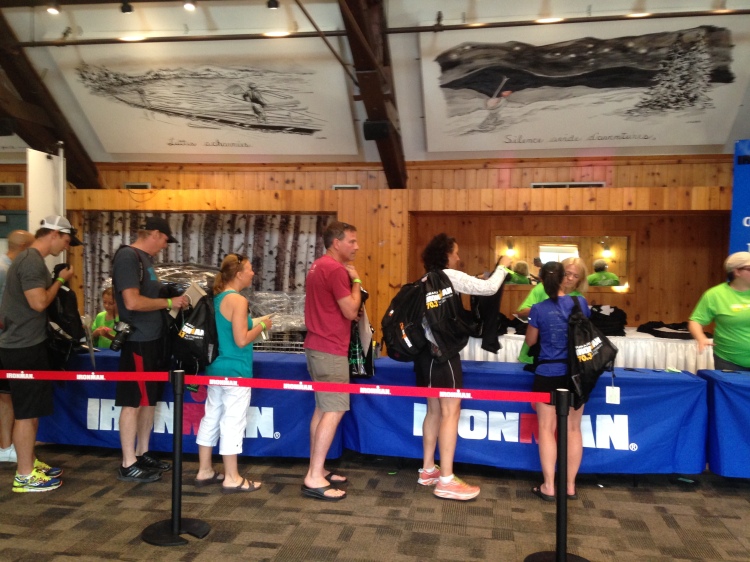 Having checked in, we slept in on Saturday, went for a brief swim and checked out the expo and Ironman Tent which was full of things I personally do not need including $84.50 Ironman flip flops, Ironman hair elastics, oven mitts and dish towels. 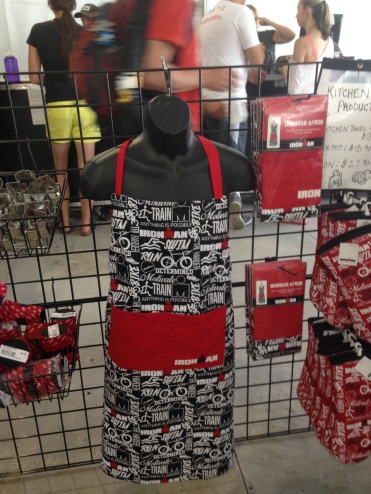 I did buy last year’s shirt for $5. I also got a free Subaru Ironman fan which displays “Subaru Ironman” “Swim Bike Run” I have no idea what we will do with it but it was kind of neat!

With the 5150 on Saturday bike check in is not until 2pm so we rode back down after lunch and racked the bikes. I had the usual problem. The racks are too tall and my bike  and I are too short. I filled my handlebar hydration system as full as possible (I even filled the straw) and the bike was almost touching the ground. There were bikes around mine that were not touching the ground at all. 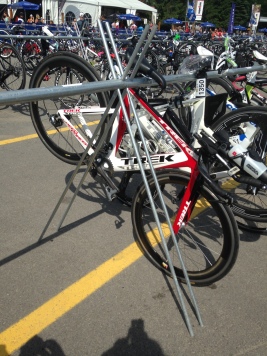 We set the alarm for 5:30 am Sunday morning and were out of the condo before 6:00 am to get into the best parking lot (I am not telling where that is). We just got in before they closed it off. Harold was volunteering so he went off to work while Chris Bright and I set-up in the t-zone and got body marked. We were at the beach in plenty of time to meet and great everyone we knew (going to this event from Ottawa is like never leaving Ottawa because there are so many triathletes from Ottawa there!). I also had time for the long, porta-pottie before you put the wetsuit on line. 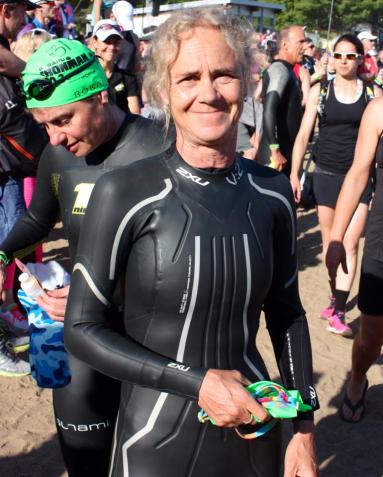 The race started with the VIP’s being piped in along with a very hot looking Mountie in full dress uniform. The national anthem was sung and in true IM Mt Tremblant style we had a perfectly timed jet flyover. Which was pretty darn impressive! The water was a perfect temperate and it was smooth as glass.

There were about 200 women in the wave, I am a pretty reasonable swimmer so I decided to play it safe and start at the front. I got out of the wave ok but a group of 4 or 5 got out together ahead of me so I was alone between them and the main pack. I passed the first gentleman doing breast stroke before we hit the first buoy. By the time I reached the third buoy we were in the middle of the wave in front of us. At that point it’s all about getting by safely so I expect the lead group had broken up but it’s impossible to track the women in your own wave when you are in the middle of the one in front.

I finished the swim in 31.07 not my best swim split ever but after having broken both elbows over the last 3 years I will happily take that time.  I knew I was not first out of the water but I was not sure how many were ahead of me. The only thing I was sure of was that Leslie Sanderson who started a wave behind me had to be ahead and although I did not see her she was, her 25.54 swim was the 27th fastest swim of the day including all the pros, faster than Lionel Sanders who was the overall winner.

It’s quite a long run to T1 but it’s carpeted the whole way. I was a bit confused when I got there because all of the bikes in my area looked like they were still there, there was no one around the racks and I knew I was not first and not that far behind the others. I don’t really study the competition before a race but I do check the range of bib numbers so I knew (I thought I knew) that bibs 1349-1474 were in my age group). All the bikes were still there.

I headed out on to the bike course and passed a couple of women quite early. The bike is definitely not my strength so I am usually the one getting passed. One was in my age group. The other had a number in the 300’s so I assumed she was not. I passed two more women before we hit the turn around on the 117 again the bib numbers did not seem to be my age group but as I was in the first women’s wave I could not figure out where they all came from? The next women’s wave started 4 minutes behind us. I got passed by some women on the way back down the 117 only one had the bib number I was looking for? I stopped worrying about it and just rode.

Even on the bike it was a hot day and I was thrilled to discover that the water at the aid stations was chilled! I poured it all over myself. The one and only complaint I have about this race is that the bike course was really crowded. It was a real effort to make sure you were never drafting and if you pulled out to pass and then pulled back in again there were times when you had to wait for a break in the passing traffic to pass again! It was like driving on the 417!

They had the refs on bikes (real bikes not motor bikes) giving out penalties –I love that.  I heard a couple of people getting them. In general I saw a lot less drafting on the 117 than I have other years. Other than the occasional idiot passing on the right my bike was pretty uneventful. Going up Chemin Duplessis was hard work but it always is. My bike split was 2:55 which is almost exactly the same bike split I had last time I rode this course. 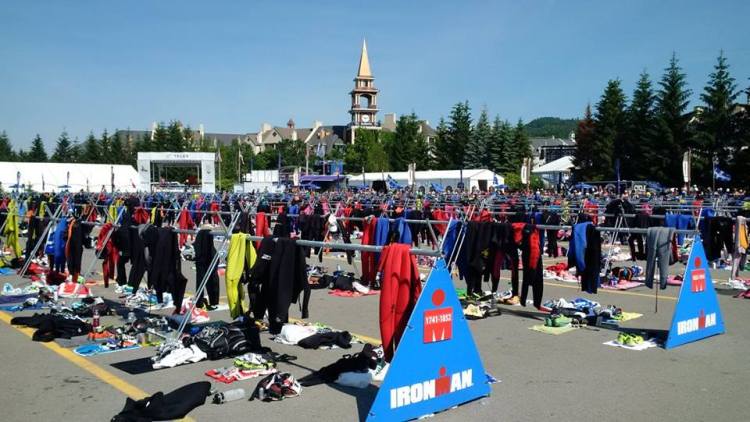 I pulled into the T-zone and once again I was perplexed to see that there were no other bikes on the rack in our area. I figured maybe there were bikes from our group on the next rack as well? I put on arm coolers thinking anything might help and started the run. It was hot but as promised pre-race there was lots of ice. In fact there aid stations with ice and water almost every km. I used it all! I stuffed ice in my bra, I stuffed ice in the pockets of my tri-top and I tried to stuff ice down my arm warmers but it’s hard to do while running. After the race I talked to other people who put ice down their pants. I did not go that far. I did not run strategically. I just ran and if I saw a woman in front of me I tried to catch them. The course flattens out on Le P’tit Train du Nord I usually find that section tough because it’s boring but it was kind of fun, in a running in the heat when you are really tired kind of way, because there were so many people I knew passing the other way. Pro Jordan Monnink and his girlfriend were staying with us in our condo (very nice people who had a rather eventful trip to Tremblant!) he noticed me running towards the turn-around as he was coming back and called out some encouragement. I saw lots of other people I knew going out or back which was a good distraction and I tried to call out to everyone but I can be pretty oblivious to my surroundings when I am running. I passed a few women and one passed me but really I just ran and shoved ice down my top. By the time I reached the turn around by the old village with about 5 km to go. I knew the only woman even close in front of me was Leslie who is not in my age group and who started 4 minutes behind me and the only women even close behind me was at least three minutes back. I just kept running. Final run split was 1:38

I crossed the finish line in 5.11.49. While we were in the finish tent Tina Kinder who is in my age group and I have raced against before came by. Her bib number was 363. It was only then that I figured out all the All World Athletes (age group athletes who did well last year) had a totally different set of bib numbers and their bikes were racked in a totally different spot. The mystery of the missing women was now solved. I skipped all the post-race snacks including the poutine ( I am pretty sure Tremblant is the only race with a poutine truck), had a chocolate milk and a free massage and left the finish area with a certain amount of chafing and possible frost bite on my chest!

Overall a really hot day but the organizers and volunteers did an outstanding job providing us with everything they had to help deal with it. I was pleasantly surprized to discover I won my age group. Now I just have to do it all twice on August 21st! Congratulations to everyone who beat the heat and thank you to everyone who was out there volunteering and cheering.