We traveled from Uvita to San Jose on the long distance Tracopa bus which leaves several times a day from the terminal in Uvita. You buy your tickets before you get on the bus at the store in the station. The ticket seller spoke no English so I used my best Spanish to buy the tickets. We were a bit confused because the time on the tickets was the time we bought them at. Several buses stopped and we kept asking if they were the right one. At one point a driver put our bags in the locker for one bus only to be told by the driver of another bus that we should be on that one.

The bus we ended up on did take us to San Jose. We ended at one of the bus terminals in central San Jose. There is no central bus terminal. The bus companies each have their own. We were not a long way from our hotel, the Hotel Marruecos but we took a taxi as we were unsure where we were going. The hotel was pretty securely locked up (you had to ring a bell and stand in front of a camera to get in). The rooms are basic and the bathrooms were shared. There was a bus stop in front of the hotel and a shop selling snacks but the streets were a bit too quiet at night.

We spent a good deal of our time walking up and down the streets in and along the pedestrian only area in the center of town. It’s full of shops, restaurants, classic buildings and street vendors and artists.

There are several McDonalds along the route and the free Wifi works outside. It’s very popular and the password at all the locations when we were there was BIGMAC.

The National Theater built in 1897 is described as San Jose’s most revered building. It has lots of impressive statues. You can stick your head in the door and see a few but you need to take a paid to tour to see it all. There is also a café inside the main lobby area.

A big indoor market of craft vendors, it’s all tourist stuff but some of it is quite nice.

One of a few churches that we stumbled upon walking through the pedestrian area. 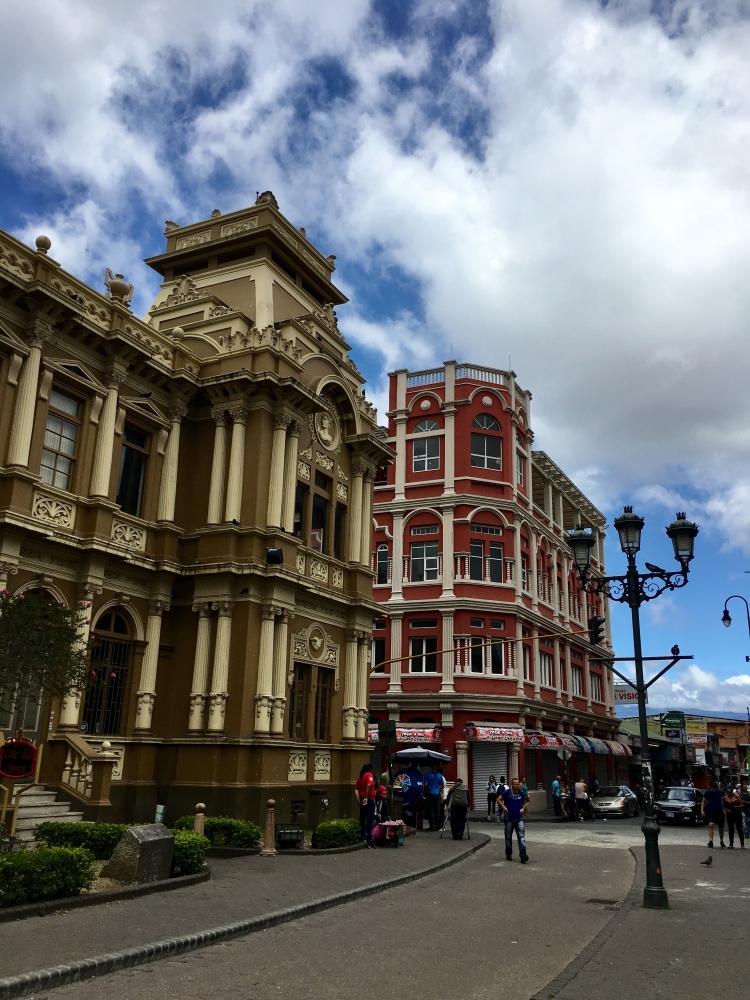 In general you can spend lots of time just wandering the pedestrian zone. We went through a few small parks in the area and stumbled onto a beauty pageant photo shoot in one. Getting too far off the main tourist path is probably not a good idea. We had no issues but San Jose is not considered to be overly safe particularly at night. 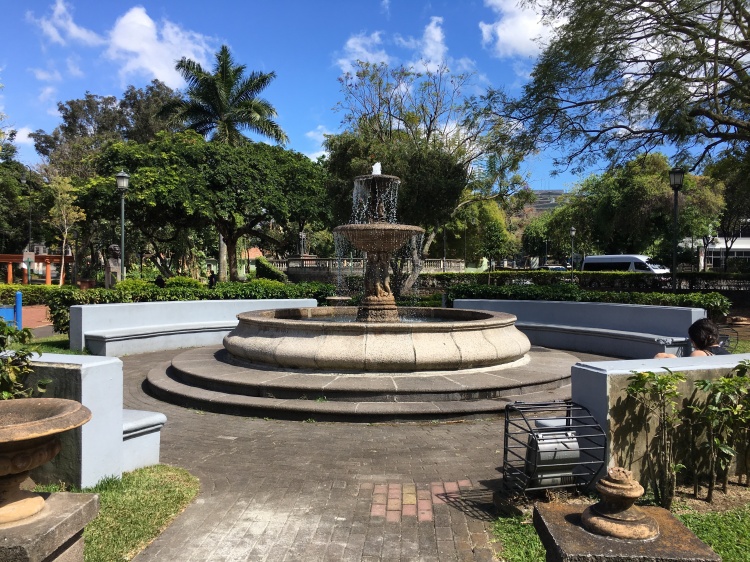 We stumbled on a small restaurant not far from the hotel which quickly became a favortite. The Café Rojo. The food is described as Vietnamese/Costa Rican Fusion? Whatever it was it was really good. We ate dinner there but they did coffee as well, they also have a bookstore.

There are several tour operators in the main tourist area of San Jose who will take you here for $40-$65 US each. You can also take a bus from San Jose for $9 US with no tour. If you have read my other blogs by now you can guess that we took the $9 Bus. It leaves at 8:00 am from in front of a hotel across the street from the Teatro Nacional. We were told it can fill up so we went early. We spent quite a long time looking for the bus or the correct stop. When did find it there was an obvious sign indicating the stop.

We were the second ones in line but the bus was relatively full by the time we got on it. The bus goes via the town of Orosi from there it winds up to the top of the volcano. Its a two hour ride. Irazu is the highest active volcano in Costa Rica and also the only place other than Vocan Baru where you can see both oceans on a clear day.

Before you reach the top there is a park gate where we all got off the bus and paid to get in. The weather was not as co-operative as it was on Volcan Baru. It was cold, damp and cloudy. Actually we were in a cloud. We were slightly under dressed. Many of the other people on the bus were very under dressed. 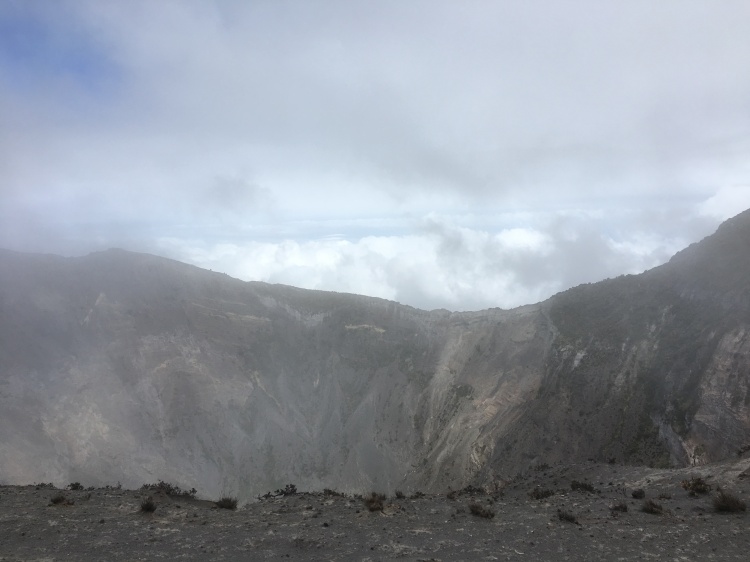 The bus dropped us off and we were told to be back by 12:15 or it would be a long walk home. We explored the inactive crater at the top and admired the occasional views of the two below. 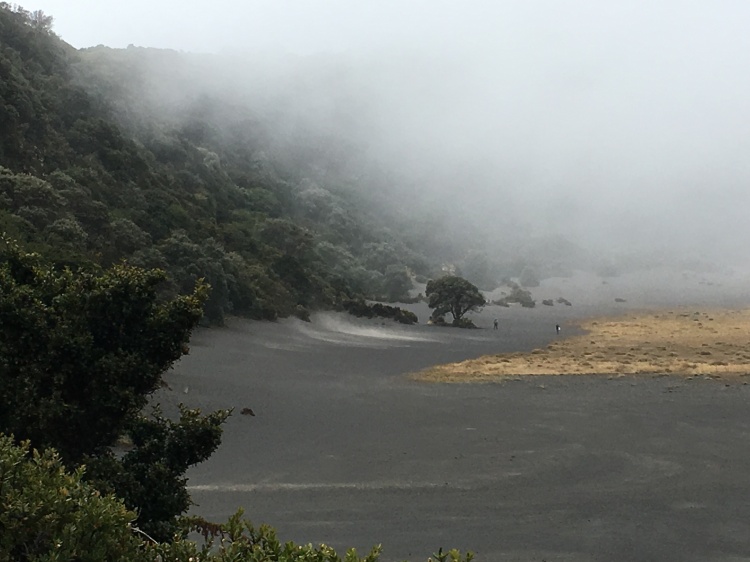 It was very scenic when we could see it. 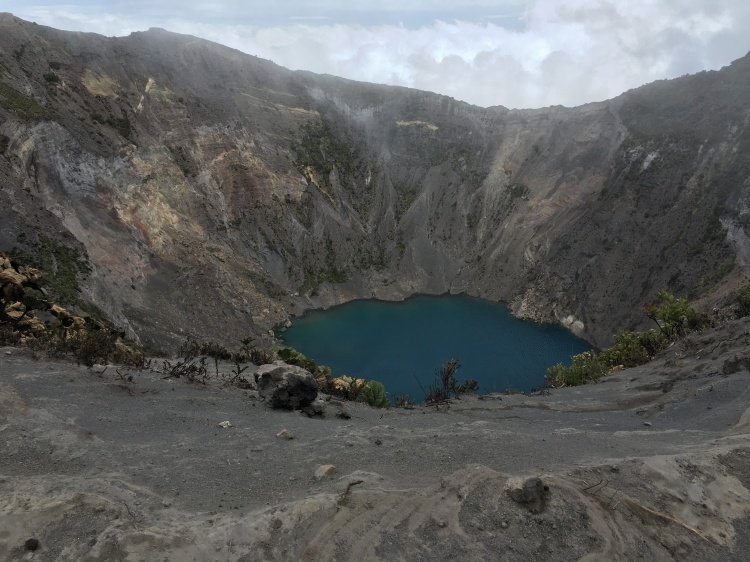 We did not get to see either ocean but it would be a great spot for a picnic on a nicer day. We flew home to Canada after that so for now the story is done!

Overall we enjoyed Costa Rica and wished we could have stayed longer. We obviously need to go back.