There are two ways to get from Panama to Costa Rica by bus.

The fastest and easiest is the Tracopa express bus from David to San Jose which appears to leave at 8:30 am and 1:00 pm. Tracopa has a website with schedules and prices but the schedule on line was not the schedule we were told was running. It’s possible that the confusion lies in the one hour time difference between Costa Rica and Panama. The times online may be on Costa Rica time even though it’s not local time. The bus costs $18-$19 each. You can get off at a few places before San Jose including Uvita but the price is still the same. It was not clear where else the bus stops along the way to San Jose. They actually help to guide you through the border crossing. The buses leave from the David bus terminal, which is quite large and spread out. They are pink so they should be easy to find. We never found them or the stop for them.

We sometimes ask ourselves why but once again we chose the cheaper more challenging and interesting route and went the local way.

No matter which way you go if you start in Boquete the first step is to take the local bus to David. The buses leave every 20 minutes or so just around the corner from the central plaza. The trip costs $1.75 and takes 45 minutes to an hour. The bus will take you right to the David bus terminal.

We took a local mini bus from there to Paso Canoas although the bus was actually posted as Le fronteras (the border). They run every 15 minutes, it cost us $2 each and the trip took about 11/2 hours. Like the other collective buses the trip time varies depending on pick-ups and drop offs. 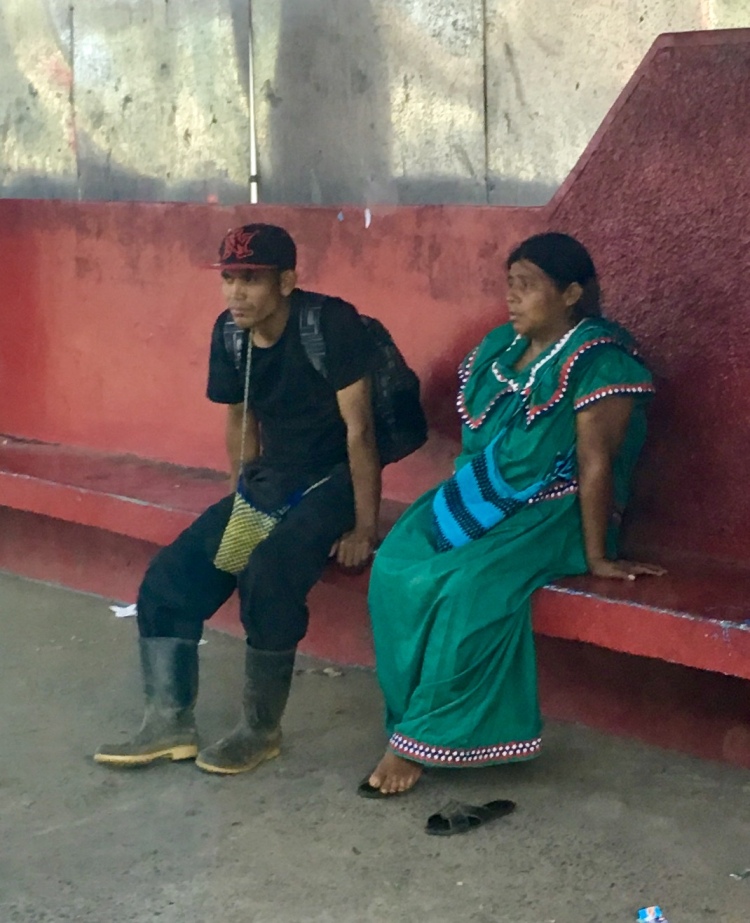 The bus dropped us off at a small station across the street from a large building that says Panama on it. We stopped for a snack and then headed that way as it looked like the border. We had been warned in advance to make sure we got an exit stamp in Panama before we entered Costa Rica. The border at Paso Canoas is one of Panama’s busiest and there were lots of cars, buses and people. One of the buses was the Tracopa bus from David to San Jose and the guide tried to convince us to pay to join the bus (for the full price even though we had already made it well past David). We declined.

We found windows which said exit Panama so we got in a line. We were then told that our bags had to be looked at before we could exit the country. After some searching we found someone to inspect the bags. We entered a room with a big scanner like the ones you see in airports but it did not look to be working. We opened the bags, they poked them a couple of times and sent us on our way. We did not get a paper or stamp so we were not sure how anyone would know the bags had been checked.

We got back in line. The line was not long but either cars got priority or the locals bud in line a lot because people kept going around us. We eventually got to the front of the line where our finger prints were scanned and we got the required exit stamp. The finger print scan is normal in Panama they did it when we arrived at the airport.

There is a bit of a no man’s land between Panama and Costa Rica. The Costa Rican customs is on the right just past the border police. You could miss it if you were not looking for it. It is critical that you stop there and get a second stamp!

In January of 2019 the entry requirements for Costa Rica were proof of $100 US cash for every month you were staying and proof of ongoing travel. No one asked us to prove we had any money but we were asked for proof of ongoing travel. There were lots of people waiting for some kind of official documentation. My guess is they were temporary workers. Lots of people had all kinds of papers which may have been because they were driving across the border. We just got in a line no paperwork required.  Overall the crossing was pretty simple and did not take as long as we expected. We were told it could take 3 hours it took us less than 90 minutes. It was nothing compared to crossing from Thailand to Cambodia by land.

It would be pretty easy to just walk right past both border stations which would lead to many problems later. Any time we passed through a police checkpoint in Costa Rica or Panama they went through the passports looking for the stamps. I have seen posts online from other people about $1000 US fines for not having a stamp.

After walking in the sun with full packs for a while we discovered that the bus station is actually between the Costa Rican and Panama customs offices on the opposite side of the road. Once we found it we boarded a bus for Neily 18km away.

The trip cost us $0.90 each. A few miles into the trip the bus was boarded by police who checked everyone’s ID and our passport stamps. 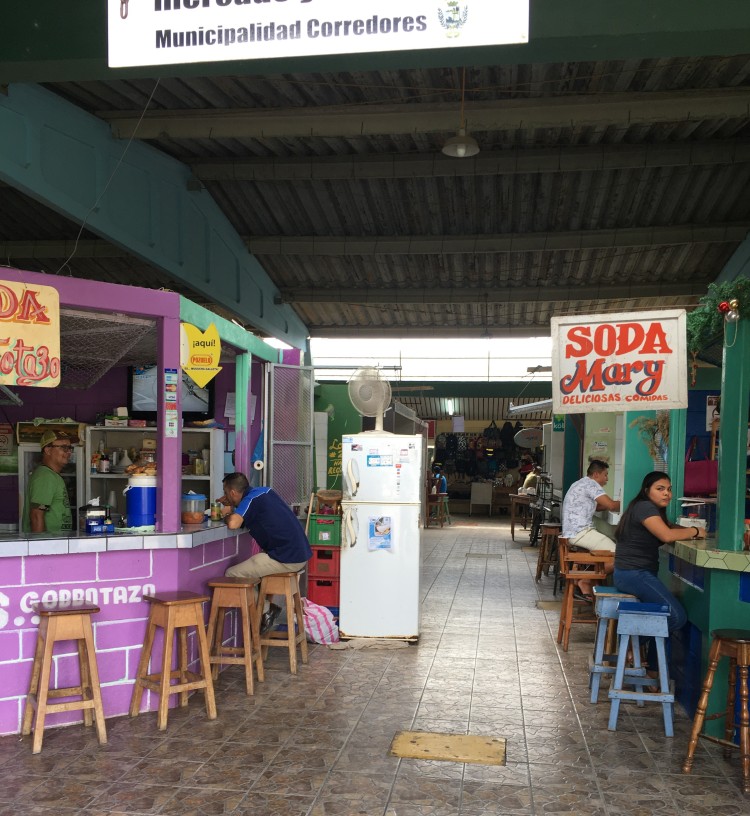 Neily has a bigger bus station and regular busses to Uvita/ Domical. There are a bunch of food stalls close by and fresh fruit for sale in the station.

We were amused to see the same Tracopa bus and driver we had met at the border stopped there for a break. You buy your tickets at a counter for this bus and when and where to line up was a bit confusing. An older man was determined to be friendly and helpful but his English was no better than our Spanish. He recruited a university student to help translate and asked us all kinds of questions about where we were going and what we were doing. At the time I was starting to get suspicious about his motives. I really regret that now as it turns out he was just trying to be friendly and helpful to the only tourists around.  We have met so many great people in so many places and 99% of them have been great. We have been so lucky but I always have that little voice that makes me think twice. 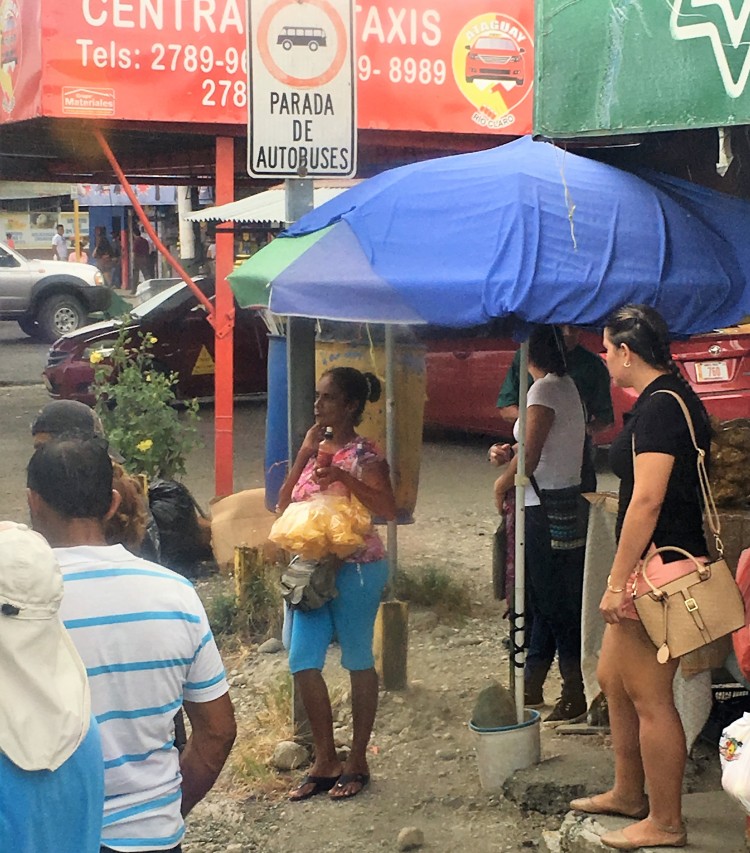 It’s a 2 ½ ride to Uvita. Uvita is actually Playa Uvita and Uvita. The two stops are about 2 km apart and although we had a GPS we would have gotten off at the wrong stop if it had not been for the determined help of our two new friends. The university student looked up the location on his phone and made sure we got off at the correct stop. The Tracopa buses all stop at one larger station in Uvita. The local buses like the one we were on stop at a bus stop on the road.