Located off the western highway between San Ignacio and the border crossing to Guatemala Xunantunich is one of many impressive Mayan sites in Belize. It’s not as big or famous as Caracol but it’s much easier to get to. You can book a tour from San Ignacio but you really don’t need to. 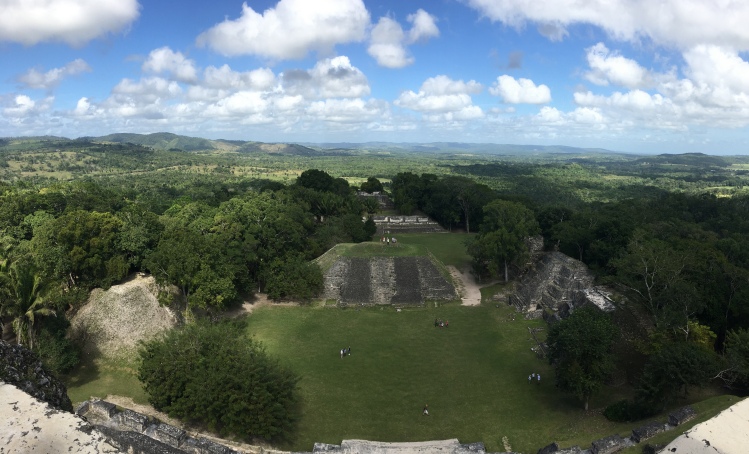 You can get to San Jose on the public bus (Banque) or by taxi. In order to get to Xunantunich you cross the river on a hand cranked ferry which is free and walk a mile up hill to the entrance. If you want a guide ($30US) you actually have to make arrangements for a guide at the ferry before you go up the hill. If you don’t want to walk there are tour available to take you up by van or on horseback. 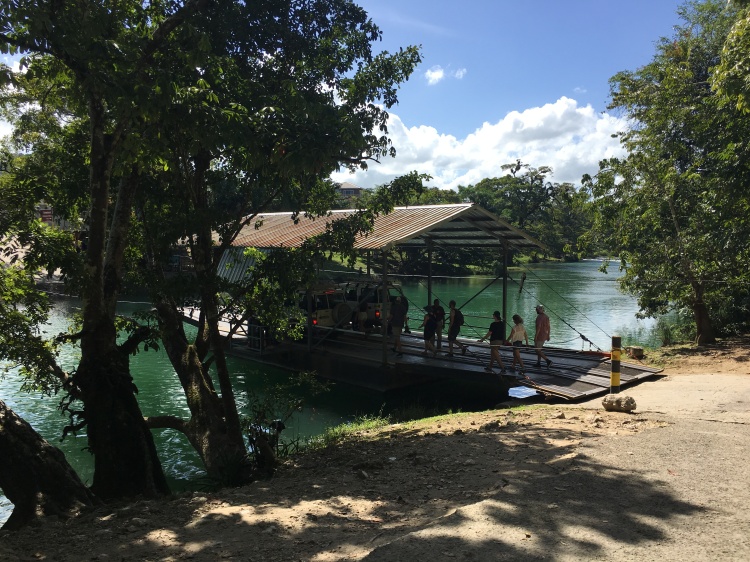 The entrance fee is $10 B each. The site is not crowded and you can climb most of the pyramids. There are no vendors inside the site trying to sell you things. You can buy local crafts in the market located by the ferry on the way out. It’s well maintained and impressive. We have been with and without a guide. We got a much better understanding of the area with the guide. There are not a lot of signs or written explanations. If you don’t hire a guide it’s worth bringing your guide book.  The site includes the second highest pyramid in Belize which is 135 ft. The highest is in only 1 ft taller. 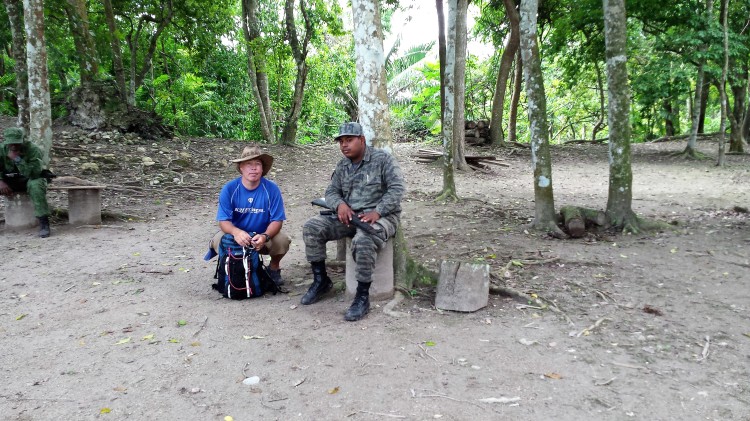 When we were there in 2017 there were police and military in the site with automatic weapons. They were friendly and when asked we were told we could take a picture with the policeman but not with the military. They told us there were there to protect tourist from Guatemalan robbers. Xunantunich is about 5 miles from the boarder which is somewhat disputed. When we were there in 2019 there was no obvious military presence. I am not aware of any actual incidents at Xunantunich but even in 2019 driving to Caracol includes a loose military escort.

After visiting Xunantuich we walked down the road from the ferry to the Trek Stop/Tropical Wings Nature Centre It has a butterfly farm, a medicinal garden and Belize’s only Frisbee Golf Course. Harold played a round. The bugs were really bad, there were chickens on the course and there was a Mayan ruin on hole 6. The jungles of Belize are full of undeveloped ruins and there is much left to discover but uncovering them is expensive and they just don’t have the money.

On our second trip there we walked to Benny’s Kitchen in San Jose for lunch. It’s well set-up for group tours but it’s sign posted from the main road so you can find it and it has a good selection of food.

We were looking for something to do on our last day in San Ignacio. ATM cave trips are the big deal but it was $100 US ($200 Belize) each. Our taxi driver from the previous day offered to take us to Pine Ridge for $85 B each which was a good deal but and we found a reference to cheap tubing so we took the local chicken bus up the Western highway towards Guatemala to find Clarissa Falls Resort. The bus took us to the end of a dirt road and we walked inform there. It was a warm but picturesque walk though local farm fields.

We found the spot and before we even got to the gate two dogs came bounding out to see what we were up to. Like 95% of the dogs we encountered in Belize they were very friendly in fact they followed us everywhere we went for the entire time we were there. The property also has a number of other “pets” including a peacock.

We wandered around and found the owner who was very nice. We made arrangements to go tubing for $40 B each. She suggested we walk around and check out the grounds first. Henry who works there took us on a tour he pointed out birds and plants we would never have seen on our own. We also sampled some fruit from the trees.

There was another Canadian staying there and he decided to join us on out tubing trip on the Mopan River. We all followed Henry down to the river where we were given tubes and instructions. We were told: go right at the first rapids and the second, left at the third and fourth and at the 4th metal boat where there is also a water pipe he will be there waiting to bring us back.

The metal boat seemed like an odd landmark but as it turns out there were a number of metal boats attached to cables across the river which were used by the locals to cross as there are no bridges.

The dogs had followed us down to the river and when we started down the river they jumped in too. They continued to follow us alternating between swimming and running along the banks of the river. It was cute until one of them got excited and tried to climb into the other traveler’s tube. He punctured the tube with is nails and the poor guy spent the rest of the trip with his finger in the hole to keep the air in. We were then more concerned about happy dogs than crocodiles.

We floated through the rapids, spotting many large iguanas in the trees. We were also impressed by the height at which there was plastic indicating the high water mark in the trees. It was an enjoyable trip and we stayed upright. Rumor has it one tourist has died on the river but we made it to the exit point in one piece.

Henry was at the exit point as promised. It was in his village where the bridge was washed out by Hurricane Earl in 2010 and has still not been replaced.

Our hosts offered to drive us back to the main road but we walked through the fields and tried to take pictures of the Cattle egret but they kept flying away.

The bus we caught on the main road was full of school kids. Belize buses are old US school buses and it certainly felt like it including all the usual behaviors from kids on school buses with no teachers around. The kids were from two different schools some had fancy button-up shirts others were just in T-shirts. The kids in the T-shirts sat in the back of the bus and yelled rude things out the windows. The kids in the button-up shirts looked unimpressed. The native language of many of the people living in this part of Belize is Spanish not English but the kids all go to school in English. Kids from Guatemala are actually bused to and from Belize each day to go to school in English.

Our plan was to go to The Orange Gallery which is supposed to be a great place to buy Belize crafts. We were going home soon so this was the time to buy anything. They also took Visa which was helpful with our low cash situation.

Buses in Belize have a driver and a guy who does everything else including spotting people who want a ride and collecting the fares. How much you pay depends on how far you are going. I told the collector where we wanted to go and we were charged the minimum which is $2 B. We told me the bus we were on only went as far as Georgeville but it was only about ½ mile from The Orange Gallery.

We were dropped off at Georgeville but the bus kept going in the direction we wanted to go in. We asked a local school child at the bus stop and she told us we were a long way from where we wanted to go. We waited and caught another bus. When we found Orange Gallery everything that was in our price range was no different than what was available in downtown San Ignacio so it basically a wasted trip.

We went back out to the road to wait for another bus and got picked up by the best bus of the trip. It was a short bus playing load reggae music so we got a party ride home. We celebrated with beer and nachos from a street stall which were unlike anything I have had here but very good.