Every year 1800 or so athletes arrive in Kona for the World Ironman Championships. Almost 24 hours after leaving home Harold, JR, Michele and myself arrived among them. The only thing that was missing was my bike. We knew where it was because we saw it sitting on the tarmac in Honolulu as our plane taxied down the runway. Kona airport is a pretty laid back kind of place. When I asked about the missing bike I was told it would come on another plane sometime and I should wait for it or come back and look later. American Airlines was leaving all the bikes they had in the parking lot! So we stuck around and sure enough the bike showed up on the next flight.

We awoke the next day to a town full of fit people who were eager to exercise. There was a never-ending flow of athletes riding bikes and running past our condo. The crowd was so thick that we had a tough time getting our car out onto the road. In our jet-lagged state JR, Michele, Michel and I entered the Path 5 and 10K which you can read about later.

The week before the race was filled with bike rides, practice swims and trips to the beach to go snorkeling. Highlights included swimming with Honu (Green Sea Turtles) which I am totally infatuated with, night snorkeling with Manta Rays, the underwear run which you can also read about later and watching amazing Hawaiian Sunsets from the Lanai (verandah). A cool feature on the practice swims was the swim up espresso bar, 1000m out in the ocean there was a catamaran where they would serve you an espresso that you drank while treading water in the ocean. There was entertainment too, a woman sitting on the boat singing and playing the ukulele (Hawaii is full of people singing and playing the ukulele).

Like all IM races, in Kona, you have to check your bike in the day before the race. Harold worked as a volunteer bike checker. He Ok’ed bikes for Andy Potts and Normann Stadler (both very famous Triathletes for those of you who lead a normal life). JR was on traffic control at one point and he let Mark Allen cross the street (a very, very famous triathlete).

Race Day started early, as always, we were up at 3:45am. We took a shuttle to the start. The guy sitting behind us on the shuttle was one of the original 12 guys who did the first Ironman 31 years ago in cut off jeans on a Canadian Tire kind of bike. I think he told me it took him 18 hours to finish, no chip times then you brought a buddy to drive along behind you and write down your times as you went along.

Body marking is body stamping in Kona with giant rubber stamps and a list to make sure each number only gets used once. After that and a final check on my bike to make sure all was well (and the odometer was working after my Lake Placid experience), I said good-bye to Harold and got into line for the swim.

The swim start is about 250m off shore along the Kona Pier. Thousands of spectators line the pier and the streets, a helicopter hovers overhead and you tread water with 1800 of your new closest friends. I tried to stay back and wide. After getting clobbered in Lake Placid I was more interested in getting out of the water in one piece than I was in getting a fast start. The swim was not as bad as I expected, I got slapped and kicked but no one appeared to be trying to kill me on purpose. The swim got more crowded at the turn around and there was more banging around on the way back because the current was pushing us into the buoys. Just as I was finishing the swim I looked down and saw a TV cameraman in scuba gear on the bottom of the ocean he smiled at me and made the shaka sign (the Hawaiian equivalent of a thumbs up). I got tripped by a wave on the stairs getting out of the water but I emerged successfully. Swim Time 1.11.19 –my slowest IM time to date but with no wetsuit and the current I had no complaints. 13th in my age group.

A little more complex than your average T zone. I took a fresh water shower to get the salt off, got some sun block put on and headed out to find my bike. I actually ran right past it, which is a drag, but we were reunited shortly there after. T1- 4.47

According to JR the air temperature was over 90F by 9am. Once you added in the humidity it was over 40C for most of the day. I did not have a way of measuring the temperature but I must say it was hot! I drank more than I have ever, there were aid stations every 10 miles and I took two new water bottles at every one of them. One to pour all over myself and one to drink. Whatever was left over as I was coming into the next aid station I poured over my head again. By the end of the 10 miles I was completely dry because all of the water had evaporated! Most of the bike course is along highway through the lava fields, it’s exposed, it’s windy and it’s hot. The first 60-70 km of the bike was not too bad, I was actually humming to myself and a couple of times I thought to myself wow this is so cool this is the World Ironman Championships and I am in it! (You do a lot of weird things to amuse yourself when you ride 180 km alone on a bike). When we got to the top part of the course around Hawi (the area which is renowned for the cross wind), it got tougher. The wind was not as bad as it can be but I had to ride on my drops in places because the wind was too strong for me to be able to hold the bike on the road on tri bars. Once we got back on the Queen K for the last 60 km or so the course started to live up to its reputation. We rode over 40km straight into a head wind. It never stopped, at times I was going 20 km/hour peddling full out going downhill and no one was passing me! I was not having fun, but then neither was anyone else. We made it back to civilization just in time to see the pro’s running towards the energy lab. Bike time 6.26.25 –again my slowest ever IM time but I was thrilled, with that wind I thought I would be out there for way longer! 20th in my age group. 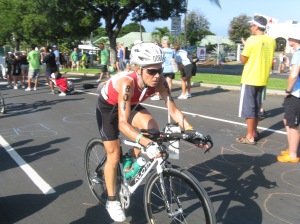 Pretty straight forward. I actually changed shorts which I don’t usually do, got more sun block although it was too late because I was already fried and headed out T2-6.17

Usually my strength but not this time. I started out on the run and it felt bad! I was really worried but once I got things moving it started to feel better. There were aid stations every mile and after the Path 5k I had decided that in this kind of heat I was going to walk through every single water station to make sure I did not over heat. I did that and at every station I took two cups of ice. I put one down the front of my shirt and one down the back and by the time I was at the next aid station all the ice had melted. Things were going well in a running a marathon after riding 180km all in 40C kind of way until I started to overheat badly. I started to get really concerned when I was shivering in the heat. A couple of the aid stations had run out of ice and I really needed it. Once I got ice all over me the shivering stopped which is good but bad too because at this point you are going from heat exhaustion to heat stroke which is not a good thing. I walked a lot more than I wish I had but if I had not done that I might have collapsed and not finished at all who knows? Run time 4.41.25 23rd in my age group. Not what I wanted but I am not sure how else I could have dealt with the heat (oddly enough I picked up 46 places overall on the run).

Overall time 12.30.11 23/57 in my age group. The hardest thing I have ever done (way harder than Lake Placid was) but I would do it again in a minute (well maybe not this week!)

It was a truly amazing experience and you have to stay with me while I thank the people who made it possible. I have said it before but an Ironman is not something you do alone. It’s something you do with a lot of help from a lot of people and at the end of the day the person who gets all the credit is you because you are the one who crosses the line but everyone else should get to cross it with you!

Thank you to my husband Harold who has supported me in so many ways through all of this you have been truly amazing. Thank you to my parents who made this trip possible and to my children who have probably forgotten what their mother looks like. Thank you to my coach JR Tremblay who has put up with a lot from me in the past year and to everyone at K2J you all inspire me everyday! Thank you to Ken Parker and all the lovely ladies of the OAC women’s racing team, to Bill Westcott and everyone at the Nepean Masters especially the Peggie and the gang. Thank you also to Ottawa’s Kona experts who took time to share their advice and experiences with me: Leslie (you were so right about keeping your core temp down!), George, Barry, Missy, Beverley, and Deanna.