We rented bikes for the day in San Trach from the same place we had used for the last two days. We only paid 60,000 even though the posted rate was 80,000 I guess we were getting to be frequent customers. 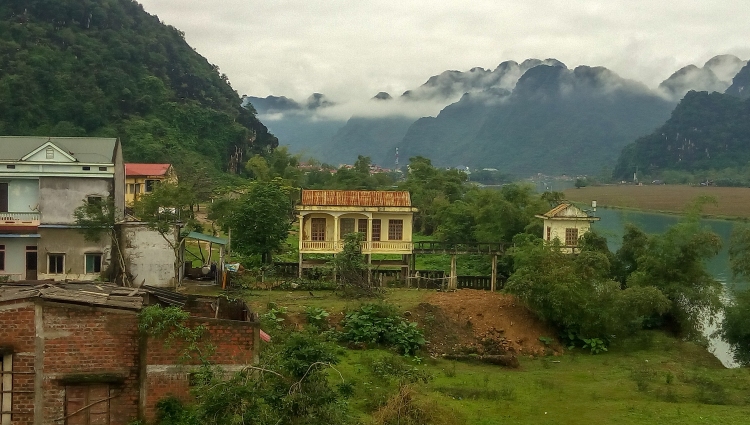 Many of the hotels in San Trach had free bikes ours did not. If I was going there again I would use one that did as the bikes were pretty useful. We stayed at the Gold Plus Hotel it cost us $69 US for 4 nights.

We got a cycling map from Easy Tiger which was free with a suggested donation to MAG an NGO which works to clear land mines and unexploded ordinance in many countries including Vietnam. You still need to stay on the marked paths in this part of the country as the area was heavily bombed by the US in what they refer to here as the American War.

We followed rural roads, which have very little traffic, there were as many cows as cars.

We included a few detours and headed to our planned destination The Pub with Cold Beer. We had no real agenda but it sounded like a good destination. There had been a lot of rain so some of the roads were almost impassable but overall it was a great way to get a look at rural life.

We rode through villages and rice patties, some had tractors but most were using water buffalo. It was planting season and the water buffalo were pulling plows through the fields one person stood on the plow, a second followed in the field throwing seeds from a basket.

There were several workers spraying something which we assume was a chemical with pumps from containers on their backs they were walking barefoot through the fields while spraying. Protective clothing appeared to be optional.

We took a detour to the Farm Homestay which is credited as being one of the places which started tourism in the area. There were posts along the road showing high water levels when. The flooding of the river is critical to farming here but the levels to which it rise are impressive. We got slightly lost but we eventually arrived at a place with a sign saying it was the Pub with Cold Beer. It seemed like we had not gone far enough but we stopped anyway. The spring rolls were great and the beer was cold. They had a cute puppy which really wanted to play but it was nipping and somewhat ratty looking.

After a stop at the pub we continued on looking for the Wild Boar Eco Farm. We crossed a suspension bridge and discovered the real  Pub with Cold Beer. The first one was a fake! The Pub with cold beer is famous because you can pick out a live chicken and they will cook it for you! The menu was exactly the same as the first pub. The fake Pub with Cold Beer had actually photocopied the menus. We had a cold beer but we did not get anyone to kill a chicken for us. 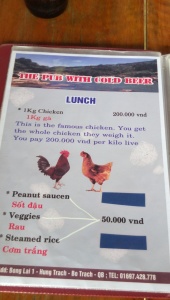 The road was very muddy so we gave up on the Eco farm, you would have needed a water buffalo to get through it.

We rode back to town stopping to clean the bikes in the river before we returned them. We did not stop at the Bomb Crater Bar even though it’s along the way.

We went back to the lantern for dinner they recognized us and the food was good we declared it our favorite restaurant in town.