We arrived in Dong Hui by train. Dong Hui is north of the DMZ and it does not get many tourists. Most tourists who do go there are there for the same reason we were, to get to Pong Nha-Ke Bang. As soon as we got off the train we were accosted by taxi drivers who wanted to take us to Son Trach the town closest to the park. They started at 450.000 VND and when we continued to say no the price dropped to 400,000 VND.

There is a hostel in Son Trach called Easy Tiger we did not stay there but we did eat there and use some of their services (more about that later). They have an excellent website which told us we could take a local bus the B4 and get from Dong Hui to Son Trach in 90 minutes. We, of course, wanted to take the bus.

We paid a taxi 30,000 VND to take us to the bus stop which was 3 km away. We probably paid too much but it was less than 400,000! He dropped us off at a bus stop that said B4. We waited 45 minutes for a bus not knowing what the schedule was. Lots of buses came and went but none were the right one. We were not overly concerned we figured we would just take a taxi if no bus showed up. We were the only tourists on the street, in fact I pretty sure people were taking pictures of us. It was a fascinating spot with workers rushing back and forth including men transporting goods from deliveries in hand carts and on bicycles. A few taxis stopped to offer us a ride and the price was down to 300, 000 VND by the time the bus showed up.

It turns out that buses also do deliveries. We would stop and people would put things on the bus to send to the next town. These included bags of coconuts and a dresser which was squeezed in between the seats. We passed a school at one point and a large number of school kids piled onto the bus, playing video games on their smart phones.

The bus took the long way through small towns, rice patties and water buffalo. About 90 minutes later we arrived at the Gold Plus Hotel  which was to be our home for the next few days. The room was big, the showers were hot, the breakfast was not very exciting but the place was very clean. 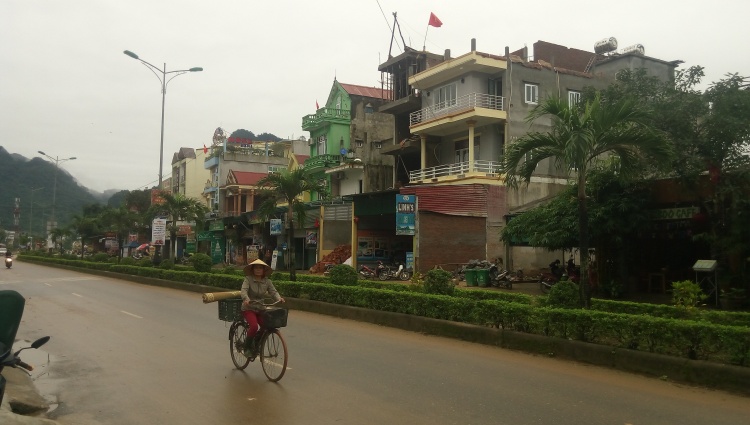 It was next door to Easy Tiger which is definitely the backpacker hang out in town. We did not stay at Easy Tiger because they only have dorm rooms. Our hotel did not have bikes If I had it to do again I would look for that.

We found a spot down the street and rented bikes for a couple of hours for 60,000 VND for two. We rode aimlessly around town. All the kids yell hi or hello when they see you the little ones in particular. It’s their only English and my Vietnamese is no better so the conversation did not go very far! We rode down the street to the boat terminal for the Phong Na Cave. There is a small market there with local goods and a bigger craft shop. Vendors kept offering us paid parking for our bikes.

We had Pho for dinner. One thing we quickly discovered on this trip is that Pho can be totally different in different places. Prices for food and drink were higher here than they had been further south but accommodation was really cheap.

Phong Nha-Ke Bang is a Unesco World Heritage Site. It has forest and trekking but it is best known for the massive cave systems. The mountains are full of caves including the world’s largest cave Hang Son Doog. The principle cavern is 5 km long up to 200m high and 150m wide in some places and whole cave is 9.4 km long. Big enough to put a battleship in it! It was discovered in 1990 by Ho Khanh a local farmer who took shelter from a storm but he lost track of where it was and it was not until 2008 that he found it again! The cave was opened to the public in 2013 with very limited access. Special tour operators are allowed to take groups of 10 into the cave. The trip can be yours for $3000 US per person. Not surprisingly we did not go!

We did go to see some other spectacular caves. There are many tours with many variations available. Dark Cave, Paradise Cave and Phong Nha Cave are the easiest to get to. We booked a tour to Paradise Cave, the botanical gardens and Dark Cave with lunch included for $60 US per person.  Phong Nha Cave is accessed by a boat tour which starts just outside Son Trach. We walked to the boats. Entrance to the cave is 150,000 VND and a boat there costs 360,000 VND the boats take up to 14 people so if you are not with a tour you need to find some friends to share a boat with.  You have to pay for your entrance and the boat at a ticket office which gets complicated as the price per person depends on the number of people in the boat. We found a South African family of 5 to go with and before we left we had added an Irishman and two Englishmen to our little self-made tour.

Once you get through the entrance the cave is huge. We went about 1 km into the cave you can go 4.5 km in on specialized tours. The features of the cave are carefully lighted and the effect is spectacular.

After the boat ride you can get out of the boat and walk through another section of the cave. 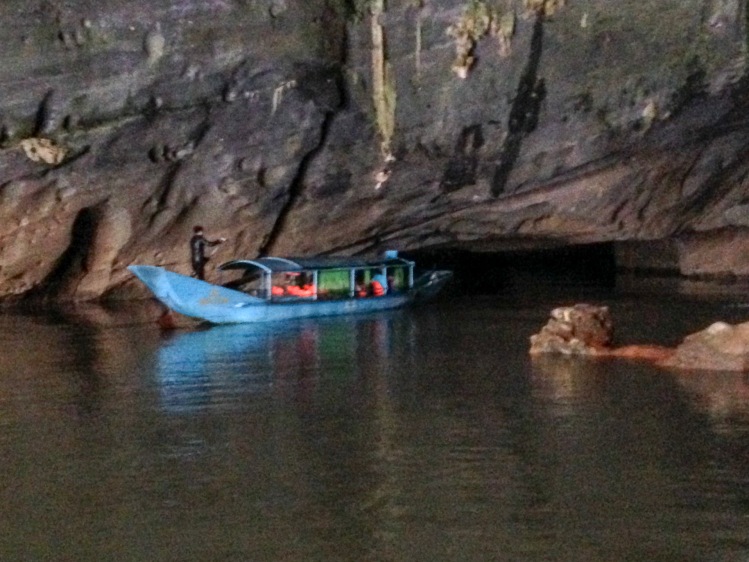 We paid an extra fee to walk up 800 stairs to the Tien Son cave which is also impressive but not as large as Phong Nha.

The boat took us back along the river and we watched life along the banks while exchanging travel tips with our new Irish friend.

In the afternoon we headed out on our bikes to the Bomb Crater bar about 4 km out of town. It lives up to its name there are two bomb craters right by the bar and you can actually sit at a table in one of them.

We were the only customers there and the bar was being maned by two young women with a baby. They were very friendly and they explained to us that in rainy season the bar and everything around is generally swallowed up by the river. We had noticed that some houses had small sheds on top. It turns out that these sheds are where everyone puts their belongings when the river floods the houses. They went on to tell us that most young Vietnamese men leave and go to work somewhere else. They send money back to their mothers and wives. The women of the family stay behind and look after the children and the house. As soon as they have more money they make the house bigger. Adding a second story is what they do first so they don’t need the shed on the roof. If you have a bigger house you are doing well and everyone is impressed. On a side note you do not see many older men in Vietnam probably the result of a not so distant rather nasty war. 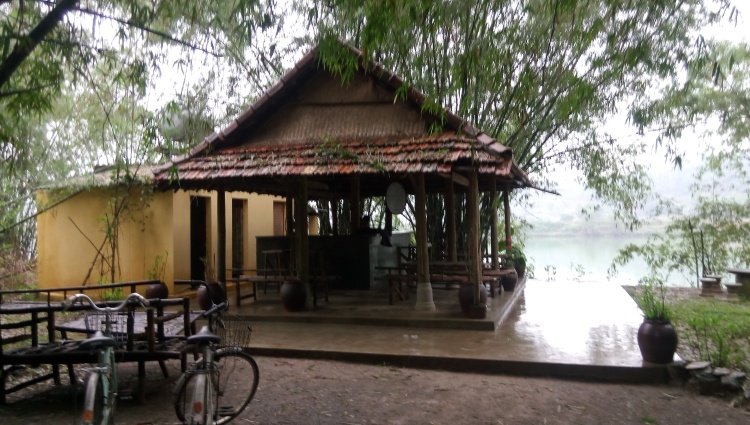 We found the Bomb Crater Bar with a map we bought from Easy tiger produced by MAG who are an NGO actively involved in getting rid of land mines which are still an issue in the jungles of Vietnam.

We had dinner at The Best Split Roast and Noddle Shop in the world probably. We had pork and noddles it was good.