Having done the major sights close to our hotel the day before we powered up with another amazing breakfast from our hotel and decided to walk to the Chua Phuoc Hai or Emperor Jade Pagoda . It was 4.7 km away and we would definitely have to cross the road to get there but we were up for a challenge. 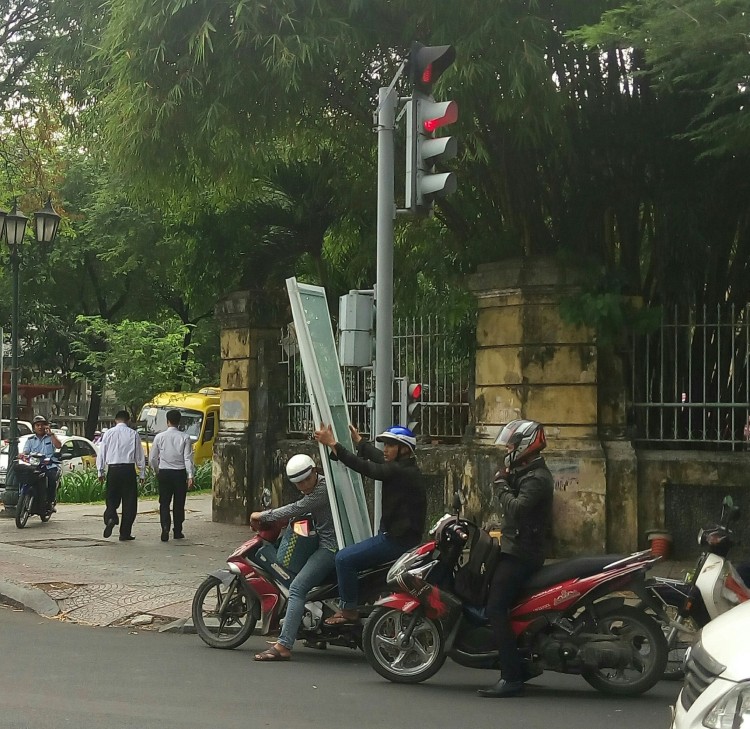 It’s a little hard to find as it’s hidden behind a gate but once you get through the gate It is fairly peaceful. 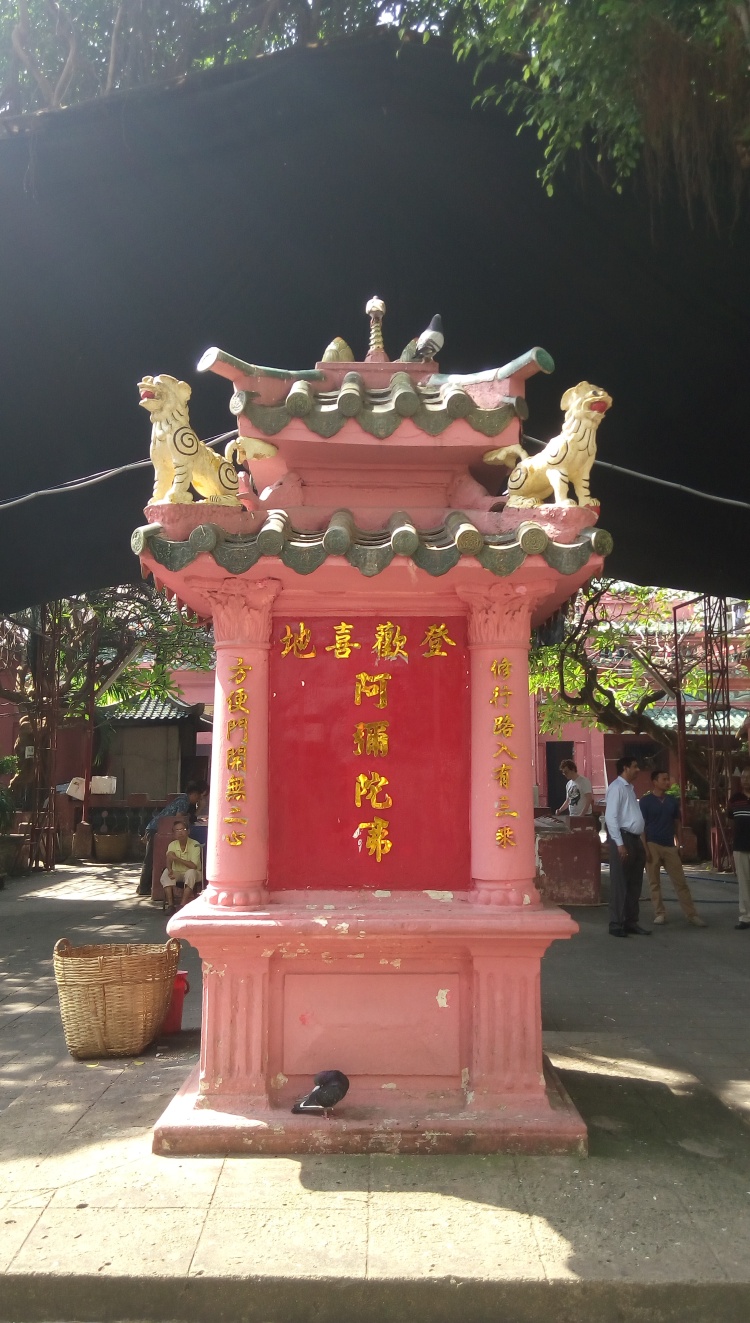 There is incense everywhere. So much of it that there is a haze all over the temple. There are several shrines and rooms with intricate wood carvings. Each Shrine is for a different ask of the gods such as fertility, business success or health. 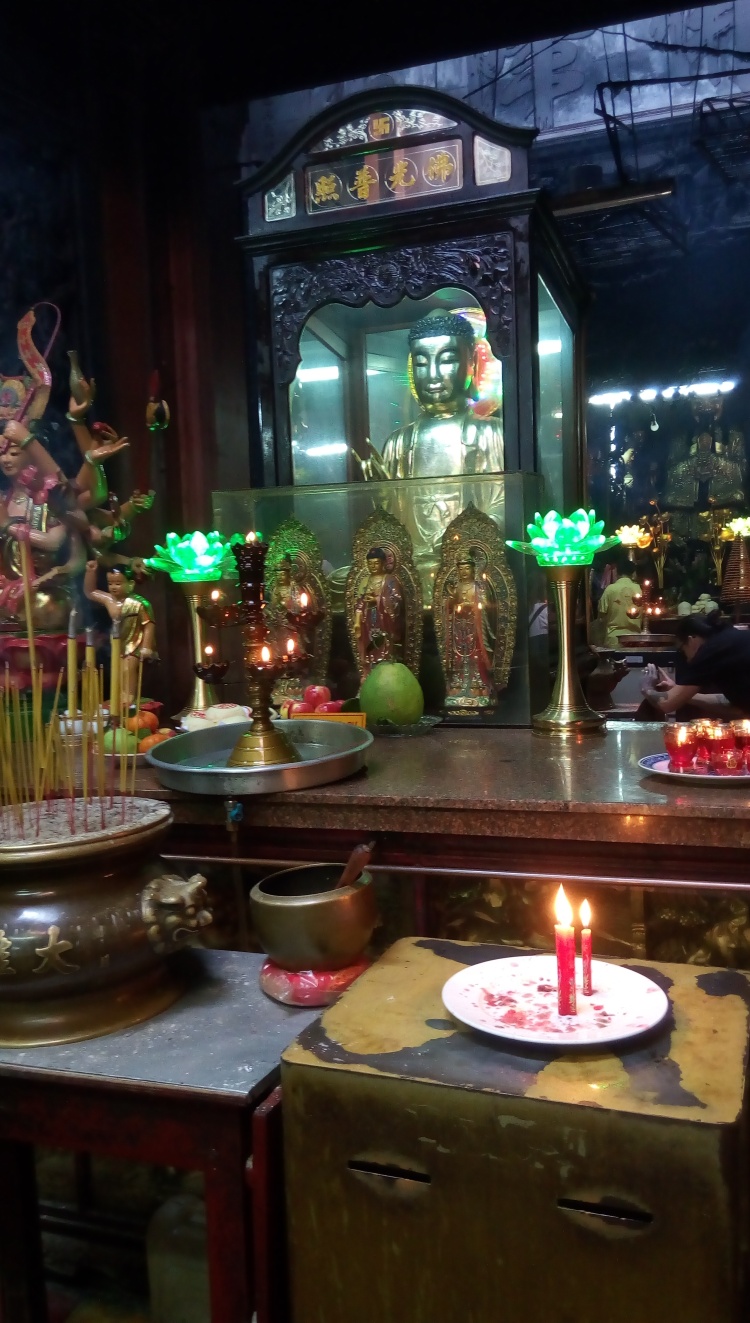 The temple was built in 1909 in honour of the supreme Taoist god the Jade Emperor or the King of Heaven Ngoc Hoang.

There is a pond of turtles in the court yard which are supposed to have writing on the shells we found turtles but no writing.

We took a taxi back as far as the Reunification Palace asking about price and requesting the use of a meter before we got in. We walked through Tao Dan Park which was full of groups of people doing everything from fitness classes to sword fighting.

The park also has a number of outdoor fitness stations which we saw all over Vietnam. There were people playing badminton everywhere.

Harold leaned against a tree to take a picture and got several rather nasty ant bites. We learned to stay away from trees.

Ho Chi Min City has big bustling streets but between the major roads there are many smaller alleys which is where everyone actually lives. Between the warm weather and the cramped space people use the outdoors to do much more than we do here including cooking family meals, butchering meat and selling various items. Even though the alleys are small and narrow you still have to watch for scooters trying to drive through.

This makes wandering the back alleys really interesting.

We went back to Pham Ngu Lao Street for dinner and were entertained by a band playing inside a clothing shop which opened up onto the street.

We had a menu in English and I ordered chicken legs. The waiter came back and asked if we really wanted chicken legs because many westerners don’t like them. We told him chicken legs were fine. We discovered the lost in translation explanation when he returned with chicken feet which were cold and turned out to be the only meal we did not enjoy in Vietnam.

Open Ticket Sleeping Buses are a popular way for budget travelers to get around Vietnam. You can buy a ticket from Ho Chi Minh City to Hanoi and vice versa. There are many stops along the way and you can stop for extended amounts of time. It’s a cheap and easy way to see much of the country. There are several companies and you can buy tickets at various travel agencies in Vietnam. It makes no sense to buy them outside of Vietnam as they are much more expensive. The buses don’t connect exactly so even if you are going the whole way you will have to change buses along the way. One advantage to the sleeper buses is that they pick-up and drop off in the major tourist areas. You can also buy tickets for a shorter part of the trip and that is what we did to get from Ho Chi Minh City to our next destination which was Mui Ne. We traveled on Hana Cafe which was cheap but basic. They get mixed reviews online. Our bus did not have a bathroom but they did stop at one highway stop along the way.

In general the buses have two layers of almost fully reclining seats and most of the time we had assigned seats. You need to take your shoes off before you get on the bus.