Boquete is the largest town in the Chiriqui Highlands with a population of 22,000. It is most famous for coffee but it’s also a great starting point for hikes, bird watching and adventure sports such as zip lining. There is a Hostel Mamallena owned by the same group as the one in Panama City which is right by the main square they speak some English and like the one in Panama City there is lots of open space so it would make a good base if you are doing this trip independently. We stayed at Arte Hostel which is also quite central. 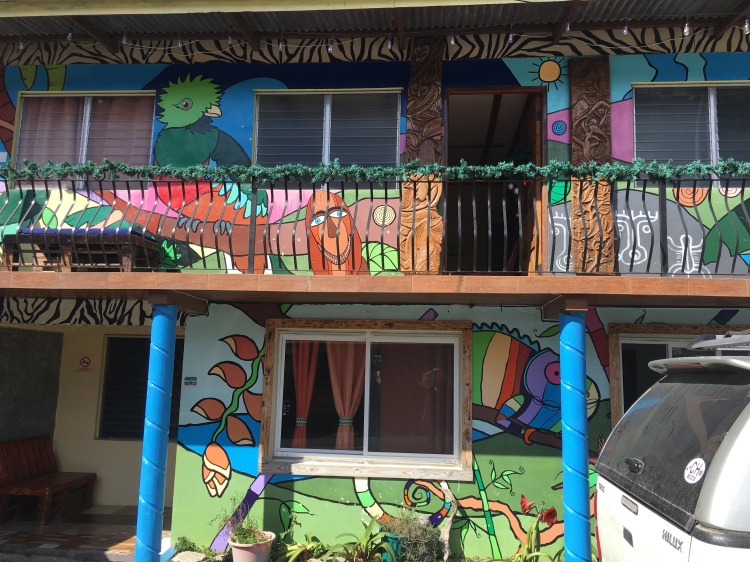 The owner is an artist and there is cool art everywhere along with a good kitchen and eating area. The showers were a bit alarming. The shower heads were electric and you had to turn them on in running water to get a hot shower! They were helpful but they spoke very little English. We asked all our questions at Hostel Mamallena. 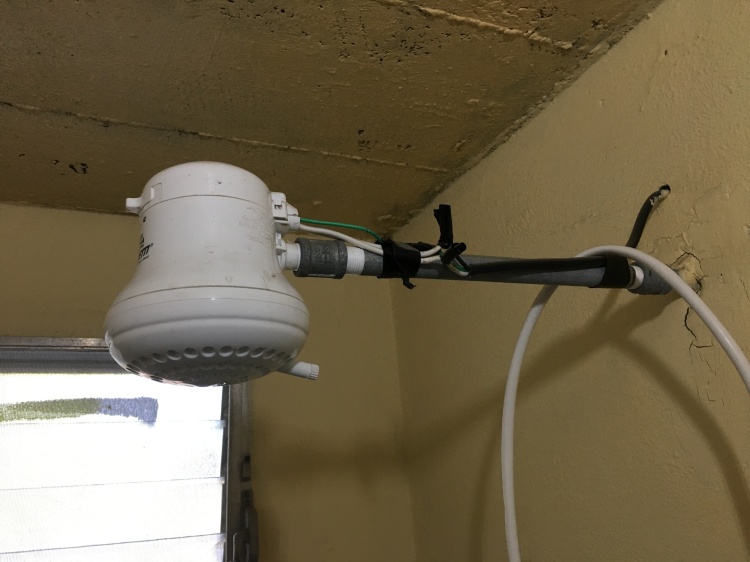 The town has a central square which is small but pretty. There is an ATM, a couple reasonable sized grocery stores, several restaurants and several craft stalls scattered around town. I bought a Mola after getting it’s complete history and some great stories from this Guna vendor. 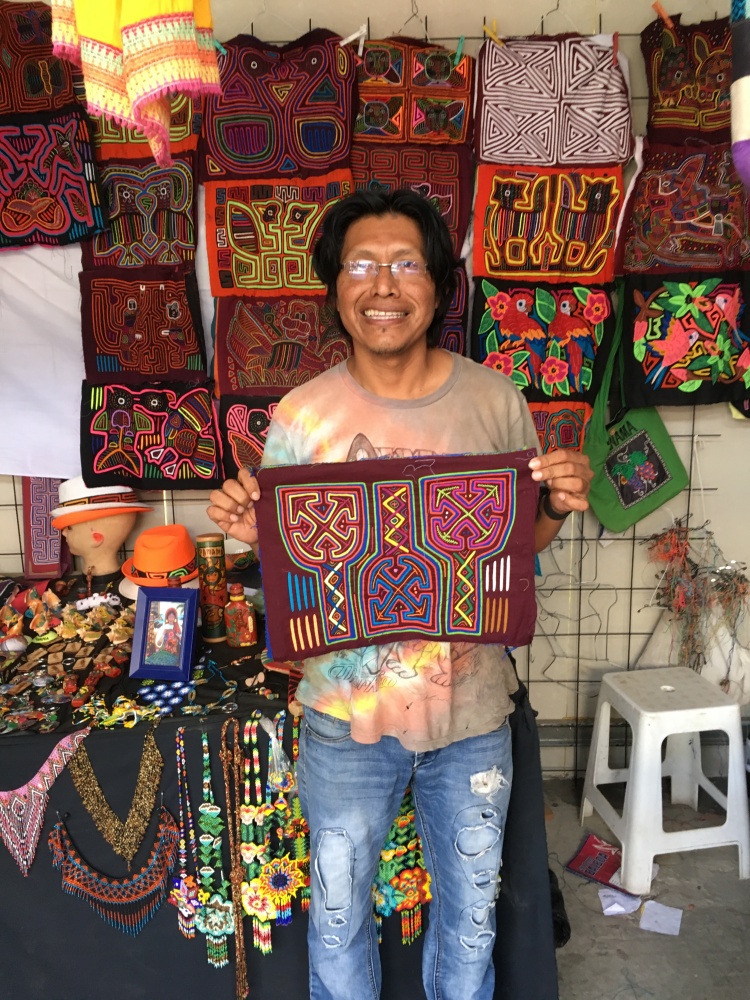 We did not find a favorite restaurant. There are a few Cafeteria style places in town which had a good variety of dishes at reasonable prices. They were definitely a favorite with the locals and the local tourists. We ate at a couple of them. They are not all open every day but there always appears to be at least one open. El Sabroson defiantly appeared to be the most popular. 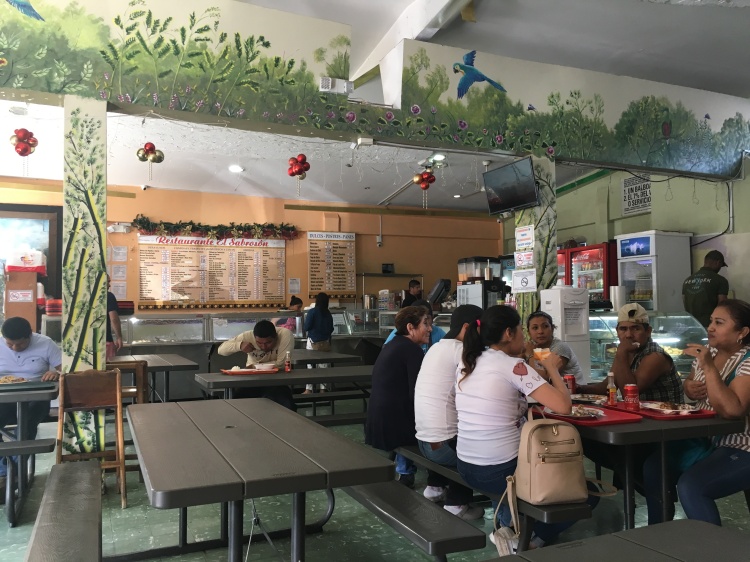 As per tradition Harold got a haircut on this trip. The barber shop he found in Boquete and the barber were so great we went back just to get a photo. 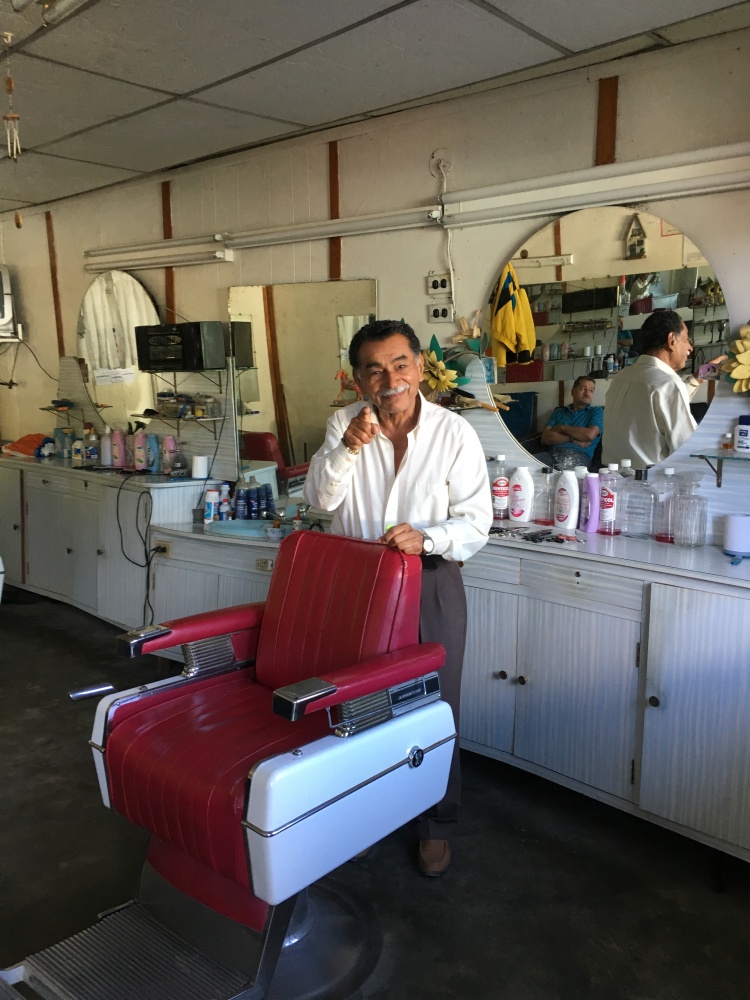 Boquete sits along the banks of the Rio Cadera. We crossed the bridge and watched local kids tubing in the river. 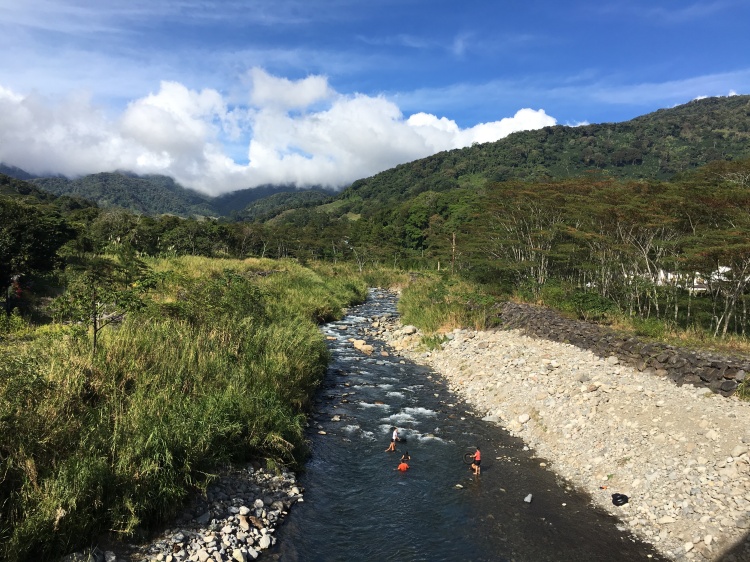 The fairgrounds on the other side are home to one of Panama’s big festivals Feria de las Flores y del Café which is held in mid-January they were getting ready for it when we were there. Lots of amazing floral displays and rows and rows of vendor booths. We only missed the festival by a few days. By the time we left the town was filling up with local tourists. 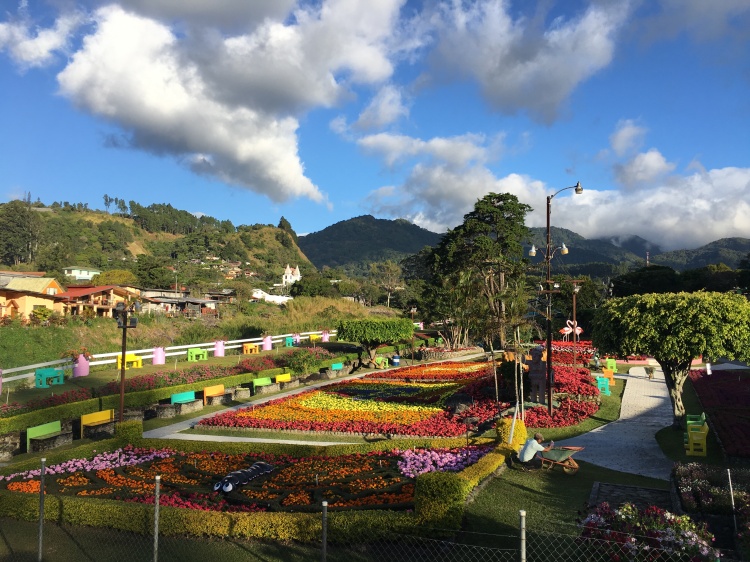 You could get a taxi or even a tour to the Lost Waterfalls but we took the local collective van. It stops by the grocery store and leaves when it is full to make a circuit through the local hills. There are different collective vans and we tried our best Spanish “Bajo Mono” but in the end waterfall worked better. Our Spanish is pretty bad. 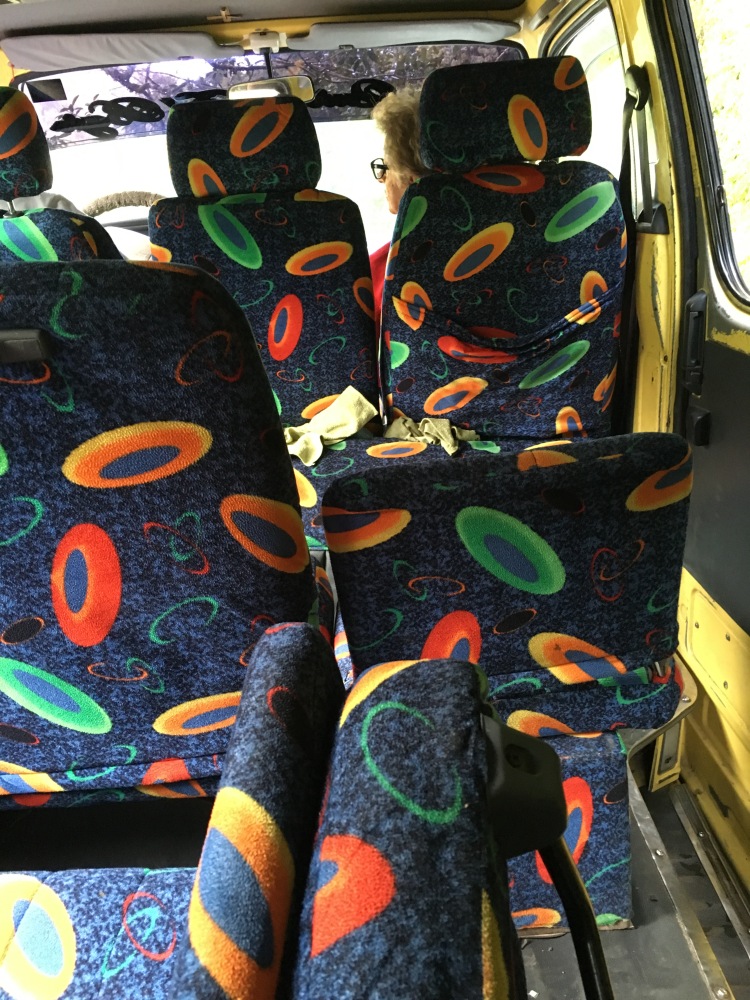 The ride was pretty interesting. They stop to pick people up and drop them off along the way. We were the only tourists and some of the people on the van were workers from the local coffee plantations. One guy climbed in carrying a machete. The living conditions looks pretty basic with whole families in one small hut but the kids were all waving as we went by. The trip was a bit longer than we expected and we were starting to worry about where we would end up but sure enough we were dropped off at the entrance to the trail. I am not sure if the official route goes right to the trail they may have made a detour for us. We paid about $1.75 each for an entertaining ride.

You walk for a while and then arrive at the “entrance” a small hut where you pay your $7 entry fee. There is a map but there is just one and it’s hand drawn. We took a picture with a phone. 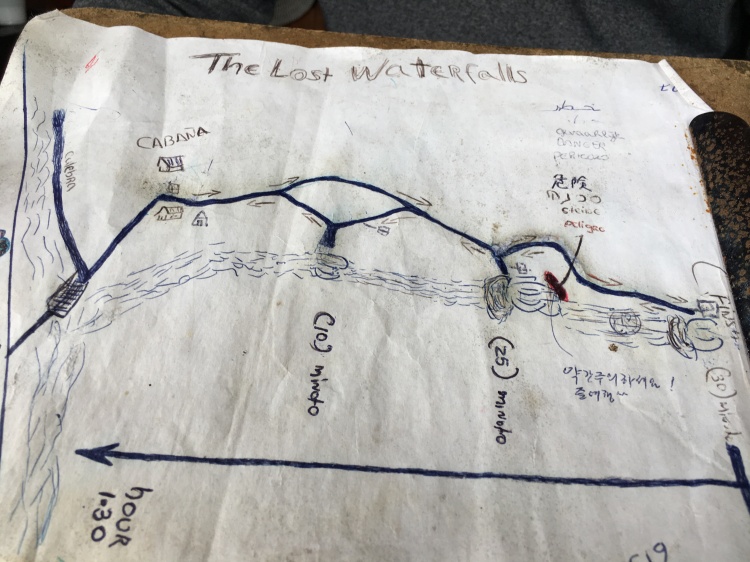 The trail has some signposts so it would be difficult to get lost. The trail was steeper and more challenging than we expected, with some muddy sections where you had to climb over boulders. Some sections had ropes to use as hand holds others did not but I wished they did. Some of the people on the trail we having a tough time and we were all getting muddy. 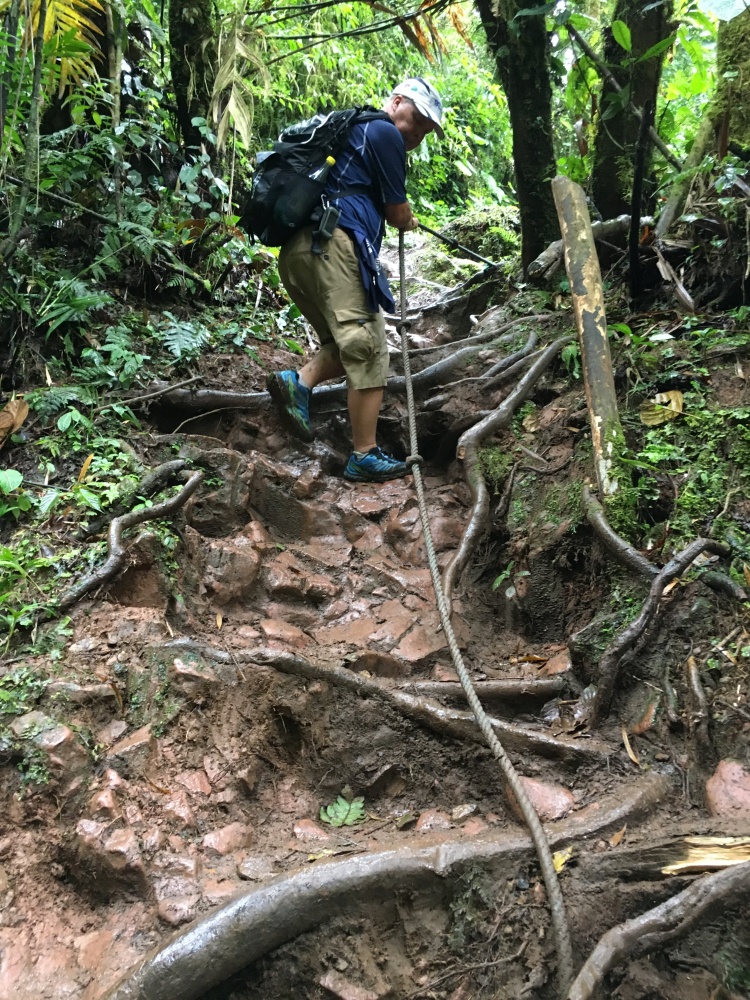 There are three waterfalls “lost” in the cloud forest. They are all pretty and a good size. The walk took us about 2 hours. We were in sneakers but boots would be better if you have them. As you are in the cloud forest it’s wet most of the time a raincoat is highly recommended. The trail is privately owned and maintained. In theory it’s open until 3:00 pm but we saw people going out when we were returning at 3:00 pm. 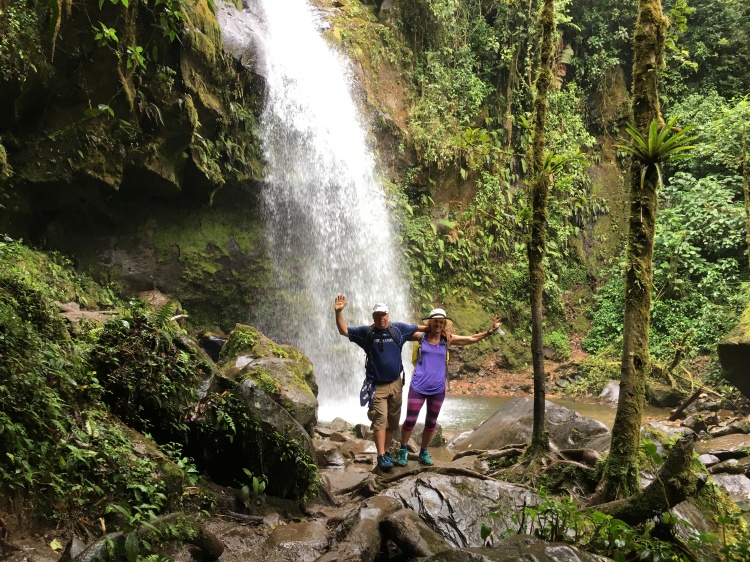 We were not sure where to catch a van back to town. We started heading in what we thought was the right direction when the van and driver we started out with appeared and picked us up. I think he may have been looking for us.

Boquete Tree Trek offers coffee tours, zip lining and a canopy tour over the rain forest on 6 swinging bridges which will eventually be 7. They have an office and coffee shop in Boquete where you start and book the tours (in the plaza across the street from the bank). It’s a modern operation with English speaking guides and regularly scheduled tours. Zip lining is $65 US and the canopy tour is $30 US you can also combine the two. We did the canopy tour.

They drive you up into the hills in an ATV bus which is quite the vehicle. The last part of the road is pretty steep. There is a hotel and restaurant on the grounds. 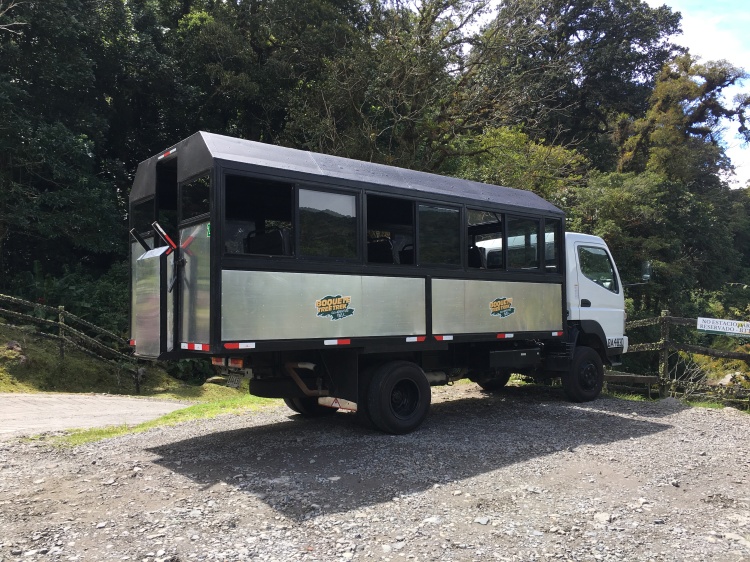 We walked through the jungle and over the canopy on the swinging bridges with a guide who was excellent. She was well informed and we learned a lot about the local plants and animals. She even spotted a sloth in a tree for us. 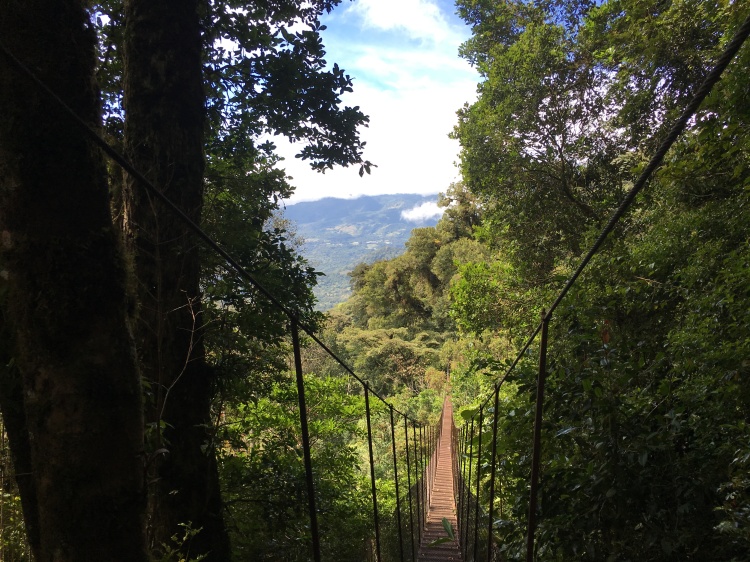 They grow coffee and tea on site. Boquete is known world-wide for coffee. The most expensive coffee in the world Geisha coffee is grown there and they grow it at Boquete Tree Trek. It is sold around the world for as much as $110 a cup. Our guide showed us the fields but we did not get any free samples. 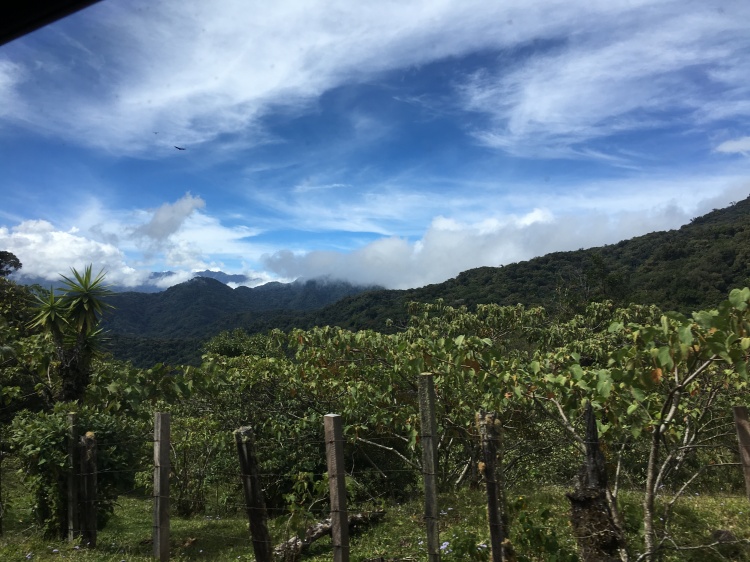 Even the coffee and tea tours don’t get to sample the Geisha.

We were told that Sendero de les Quetzales is a beautiful hike particularly the part closer to Boquete. It can be done as a through hike but it’s a long ride back by bus. Trail conditions can be muddy when it’s wet. It supposed to be one of the best places to see Quetzales a must for bird watchers but we did not see any.

One thought on “Boquete”