This was the first year for the Marathon du P’tit Tran du Nord. They had a marathon and a half marathon distance both of which had relatively small field caps, 1200 for the marathon and 800 for the half. The races sold out very quickly.
Both races are run completely on the P’tit tran du Nord, a multi-use stone dust/paved trail which was once a railway line. The trail is very similar to the rail trail which runs from Ottawa out to Carleton Place, generally straight with no really steep inclines or declines because it was built for trains. Both races finished at the old train station in Saint Jerome.
Over 20 runners from K2J Fitness headed to Saint Jerome for the event. Race kit pick-up was held at the official race hotel, The Comfort Inn & Suites Saint-Jerome. The Best Western Saint-Jerome is just across the street. Race kit pick-up was only race kit pick-up (no expo), we were all asked for ID to pick-up our bibs and there is no race day pick-up but with an early start the next day it makes sense to spend Saturday night in Saint Jerome.

Mike Blois, John, Rita and I drove down together. Mike and John who have run many, many marathons between them did not bring any gels for the race. The “plan” was to buy some at the expo. As there was no expo that was a bad plan so after lunch I offered to drive them to a store to buy gels.

We used google and found a sports store which carried running gear. With both John and Mike giving directions, which were similar but not always the same, we simply could not find the store. Eventually we parked at a mall and got out to look on foot. On the plus side we did find the store but on the minus side it had burnt to the ground! We eventually found a cycling store where they were no gels and the staff had no idea where to buy them. A customer suggested Sports Experts. I was a little skeptical but things were looking bad so far so off we went. We found the mall and there was a big sporting good looking store empty and for rent! Turned out it was not Sports Experts and Sports Experts did have a limited selection of gels, none of which Mike or John had ever used before! They bought Louis Garneau and off we went. 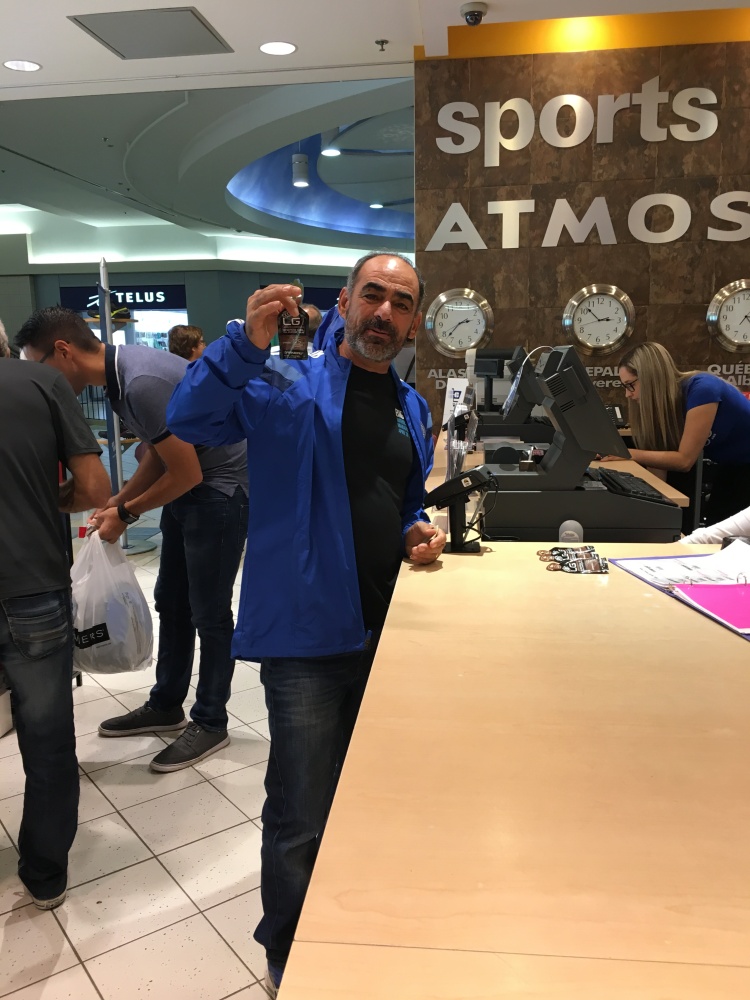 We had a group dinner at La Focaccia which was reasonably priced, took a reservation for 25 and gave us separate bills! John, Mike and I got lost on the way there and the way back, apologies to Ian who followed us on our tour of Saint Jerome!
Race morning buses to the start of the half marathon and full marathon left from the finish area. It’s about 2 km from the hotels and some people walked but we drove, had no trouble finding parking, and for the first time all weekend we did not get lost!
The buses were well marked and organized. We arrived at the start about 30 minutes later. The full marathon started at the old train station at Val David. There were port-a-potties and a bag check. We started outside but then discovered that the small train station was open so most of us moved inside. The space was pretty crowded but there were bathrooms which was a bonus. There was some inside space available at a nearby school as well. The indoor spaces were pretty cramped so you should come prepared to be outside.

The start was done by coral. There were 10 of them and there was a delay of between one minute and two minutes between each coral. Corals were based on predicted finish time. I was in the second coral but the 3:20 bunny was in the first. I found that odd but I don’t recall what I used as a predicted time.
The race advertised it’s self as the fastest course in America. An interesting claim as it had never been run before! The race has a 220M drop which is fairly gradual. The first half has a bigger drop than the second half and although it’s gradual you can tell you are running downhill. The second half is flatter and has a couple of gradual uphills. The very last couple of kilometres is paved and we all found the switch from crushed gravel to pavement very hard on our legs.

The water stations on the course are quite far apart and there was nothing but water up to the 12km mark.
Water stations
Marathon – KM: 4 – 9 – 12 – 16.8 – 21.5 – 24.2 – 28.2 – 32 – 36.5 – 39.2
Half-Marathon – KM: 3 – 7 – 11 – 15.4 – 18.1
Energy Drink Stations
Marathon – KM: 12 – 16.8 – 21.5 – 24.2 – 28.2 – 32 – 36.5
Half-Marathon – KM: 3 – 7 – 11 – 15.4
Gel Stations
Marathon – KM: 28.2 & 36.5
Half-Marathon – KM: 7 & 15.4
Toilets
Portable toilets are available a the starting lines of the Marathon and the Half Marathon.
A few toilets will be available near the buses boarding area in St-Jérôme.
Toilets are also available at the finish line, Place des Festival.
You can also find toilets:
Train station Mont Rolland – 16,800 km
Train station at Piedmont – 21,500 km
Train station at Prévost – 28,200 km
Km 34
The energy drink was one none of us had seen before and the gels were one of the maple syrup brands which were served in paper sample cups not in gel packets.
I found the stops a bit far apart for my personal running style. I memorized the location for the first few stops but after the halfway point I forgot the exact locations for the aid stations. I can do the math for 4 km apart half way through a marathon but remembering 28.2 and 36.5 is harder.
The course was scenic and the fall colours were in full swing. The course does not pass through any towns along the way, just the old train stations at Mont Rolland, Piedmont and Prevost. It’s just you and the trees most of the time. I thought that would be harder than it was. It did require more focus particularly as there were not very many other runners around.
Overall a good race was had my all. Mike Blois managed to finish 3rd overall and he and John both declared Louis Garneau their new favorite gel. When Mike crossed the finish line he was taken to the VIP section where he was wined and dined.
There were beers and bagels at the finish for the rest of us. We snagged a few age group awards to go with Mike’s 3rd place finish. So we stuck around for the awards. We parked the car near the finish in the dark and once again we managed to get slightly lost looking for the car in the light of day. We felt better about that when we found Jim and Nathalie wandering around the parking lot looking for their car. They hopped in and we drove around together until we tracked the car down.
Overall. Good race which is worth putting on your list. Well organized, not a great race for spectators but it’s a beautiful area. The course is narrow but with the corals that is not really an issue. There was no bike traffic to deal with on the paths.