We were staying far away from the party scene on Ko Phangan at Mai Pen Rai Bungalows on Than Sadet beach. We arrived at 7:00am and found someone who let us check in early which was outstanding!

Mai Pen Rai Bungalows was great. Super laid back and funky. We had a bungalow right on the beach, no hot water (although that may have changed since we were there)  and power via generator from 6:00pm-4:00am and 11:00am to 4:00pm. The public bathrooms were full of plants and there were fish in the water you used to flush. The beach is very isolated but it’s open to the public. Most of the people we saw had lots of tattoos, long hair and a pretty laid back attitude. The internet was basically useless.

We walked up the road (which was seriously all up) to see the waterfalls of Than Sadet. They were very popular with various Thai kings and there are several boulders along the way with initials of Kings on them. There is also a large monument to King V. It was January so the waterfalls had water by March is it basically dry. It was a long hot walk to the falls and we had to use Muskol for the bugs for the first time since arriving in Thailand. 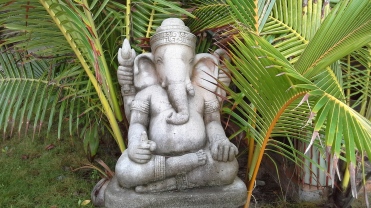 We went back to the hotel beach and discovered then had pet cats, dogs and chickens. Harold found a Frisbee game on the beach and I discovered that the river behind the hotel contained several large Baharan lizards. The biggest one must have been over 6 feet long which lead me to wonder how many pet dogs, cats and chickens they get through! They were just hanging out right behind the restaurant but it was that kind of place. The beach was surrounded by higher areas and cliffs. We climbed a long set of stairs and found a small restaurant full of books and floor pillows made for chilling. 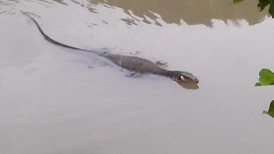 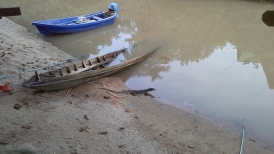 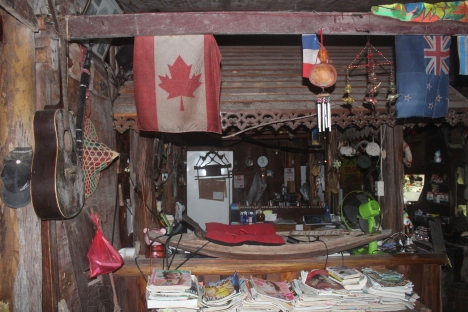 There was an add for a boat tour but it was 1600Bht plus park fee and we did not want to spend that much. We found a sign for a 700Bht Reggae boat tour so we asked about that. We were told “ The boat went down and did not come up”  so I guess it sunk. Not sure why they still had the sign up!

We met a German on the beach who told us it was possible to walk through the jungle to the nearest town. We told us it was 2.5km starting with a paved road and becoming a dirt track through the jungle.  We had no other plans so we decided to check it out. The road was indeed paved for the first 800m from there it quickly became a dirt track with cracks so big it’s unlikely it would have been drivable by jeep. From there it became a narrow path. If we had not been assured it went somewhere we would have turned around. We were the only ones out there and we were very relieved when we met a couple coming the other way. I was personally also very happy that we saw no snakes!

We made it through and arrived at Ao Thong Nai Pan Yai which is more developed. It has resorts and a 7/11 where we bought crackers and water. We hung out on the beach and snorkeled. There was a guy on the beach playing the didgeridoo.

On the way back we saw a sign in the jungle for “High on High” which promised a view to die for so we climbed up 500m to a sign pointing out that you had to buy a drink to check out the view so we bought 2 small Chang for 90Bht each. It was a great view and I am pretty sure everyone else there was high on more than just life. There was a menu which included joints for 200Bht and we were the only ones not buying but no one seemed to care. They were also selling jewelry and mobiles which were overpriced but I wish I had bought one now. 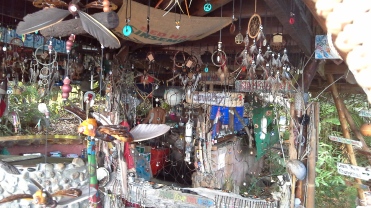 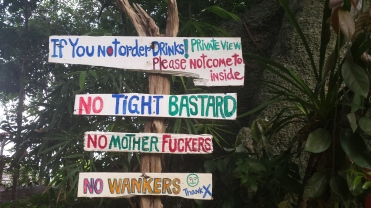 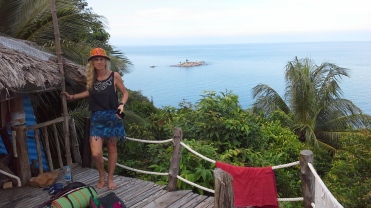 We returned to our bungalow and listened to our neighbours jamming with a Sax and a Didgerirdoo. The sax was remarkable when you think about it. You have to be pretty dedicated to drag a Sax on your backpacking trip.

The hotel had a dog (which all hotels in Thailand have). The dog was very mellow but there were a couple of local men who stopped by both sets of bungalows on the beach who the dog really did not like. The local chicken liked everyone and usually showed up at meals by the table hoping for a treat or two. There is something creepy about feeding scrambled eggs to a chicken!

On our final day at Mai Pen Rai the surf was way too high to snorkel. We explored the area and found two sets of abandoned huts. Someone was definitely living in one of them. There must be a story behind it but we did not discover it. 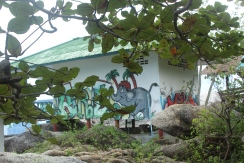 I played in the waves and discovered that waves and bikinis do not mix! One of the older male tourists was hanging out nude on the beach but I am pretty sure the waves had nothing to do with that. 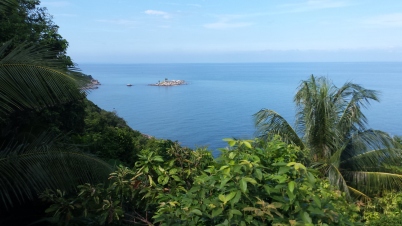 They are in the process of building an airport on Ko Phangan quite close to Mai Pen Rai. It has been promised for years and it’s still not there. If they ever do build it I expect the area will change a lot.