Because we bought a 3 day pass not a one week pass we had one day In Siem Reap which would not include Angkor Watt. If we had it to again I would have paid the extra for the one week pass because so much of the area around Siem Reap is part of the park. We had originally planned on taking a trip to the floating village, Chong Khneas on Tonie Sap for the day but after reading the on-line reviews about going there we changed our minds. Stories of the trip being an invasive look at the lives of people in a very poor village where tour operators try and sell you rice at highly inflated prices. The comment that clinched it for me was “wish we had given the money to help them not spent it on a ticket” 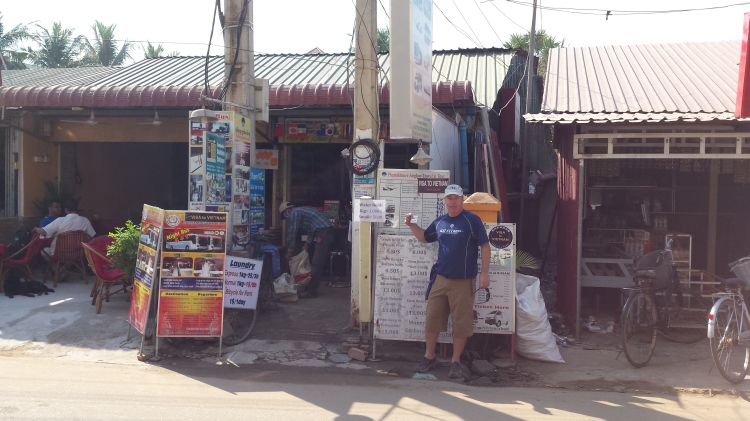 We dropped off our laundry ($1 per kg) and went for a walk around town and ended up at Wat Preah Prom Rath which was impressive. It features a reclining Buda carved from a boat based on a story involving a monk surviving a sinking ship with a piece of wood. There are also large murals with an explanation in English and a story involving a prince who discovers that life is not so great for non-princes!

We also discovered the old market Psar Chaa. It is right beside Pub Street the outside stalls are like the other markets; full of tourists, handicrafts and bootleg DVD’s  but the inside is full of local people (women mostly) selling food. It was fascinating. The noise level was remarkable with people shouting out to buy and sell. We took some pictures but it felt a bit like we were invading their privacy. We were not able to capture the atmosphere very well.

We also rode our bikes to the Royal Residence which is a popular spot with the tour groups. Not a large site.

We had a full body massage in the afternoon (it was included in the price of the hotel). We had to wear PJ’s that looked like something your grandfather wore. They put cucumbers over our eyes and pulled on our fingers and toes. I got the giggles which was probably considered bad form.

Other random observations for the day included the green garbage ladies. They were everywhere picking up litter, raking leaves and generally cleaning up. In the morning a group would go around town pulling carts with horns that sounded like rubber ducks. They appeared to be picking up the plastics.

Like everywhere else we went, everyone was drinking water from plastic bottles and there were very few opportunities to refill them. An environment nightmare!

2 thoughts on “Around the Town of Siem Reap”