This was the first Nike Women’s Run ever held in Canada and it was a very well put on event. I have to confess I was a bit sceptical going into the event. Information about the race was hard to find and you had to download a Nike App to get it but in the end they really put on a great show!

The race was held on Toronto Island, a cool location but the downside is getting there and back. Ten thousand runners plus friends and family were transported to and from the Island via the Toronto Island Ferry. I was in the first coral so I had to be on a Ferry at 6:00 am for a race that started at 9:30am. We were staying at the Westin Harbor Castle Toronto which is definitely the best choice as you can walk directly out the back door into the Jack Layton Ferry Terminal .

By 5:30 am the place was full of women. We stood around for a while but getting on the ferry and over to the island was pretty orderly and straight forward.

On the Ferry there were announcements encouraging us all and congratulating us on all those weeks of training and when we arrived on Toronto Island we were greeted by a huge sign saying welcome runners and a lady with a bullhorn who must have had six or seven cups of Starbucks strongest but it was all very positive.

Once we were on the Island there were food trucks one of which had free coffee but you had to use your Nike app to get it. There was a gear check, a massage tent, a stretching tent, a good number of port-a-potties and heat sheets which I assume were supposed to be for after the race but the weather was starting to look iffy so everyone was taking the heat sheets before the race had even started.

The other downside to Toronto Island is there is no shelter. We sat under a large tree hoping to stay somewhat dry if it rained. With the huge number of resources that were obviously put into this race a few Hopkinton style tents would be a good addition.

This was a race for everyone with lots of encouragement for first timers but the race had an elite field with some good prize money. The winner got $6000! There were some big names in the elite field Paula Findlay and Joan Benoit Samuelson included but most of the runners in the elite coral looked to be younger university age runners which was really nice to see.

There were 10,000 runners in eight waves with a four minute break between waves. By the time we got into the corals it was wet and we were all getting cold. They introduced some Nike athletes (all of whom were female and all of whom were running) had a good motivational speech by the head coach of Nike Women and we were off.

The course is not a PB kind of course but it was kind of fun. We crossed a couple of small patches of sand (which was bad news for me, when I took out my racing shoes I discovered they had a large hole in the side, it was either those or sandals so I ran through the sand in my “holy” shoes), grass, small roads, paved paths, a boardwalk and even a small section of the runway at the Toronto Island Airport which was kind of cool. Lots of turns some of which were pretty sharp and a couple of places where you needed to watch your feet. It was raining so there were lots of puddles too. I heard complaints that the course was too narrow but I did not have any issues. I really liked the course.

The on course entertainment was great drum bands which I think are great at races and a gospel choir. The choir and all the drummers were wearing bright orange Nike running shoes! There were aid stations every 3k with water and nun so electrolytes but no calories at the water stations. There were also mats every 3k and in all the places they were needed to make sure no one cut the course. There were some spectators but there probably would have been more if it was not raining 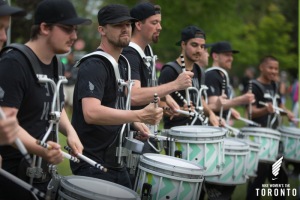 I was very pleased when I crossed the finish line and Joan Benoit Samuelson was there slapping everyone’s hands as they came through. I am not sure how long she stayed by it was a nice touch.

At the finish there was water, apples, chips and a bunch of stuff I can’t eat because it has peanuts in it but it was a reasonable post-race snack. What everyone was waiting for was the Tiffany necklace which all finishers received rather than a medal. They were the last thing you received and they are very nice. I like mine but I know it’s only a matter of time before I lose it! 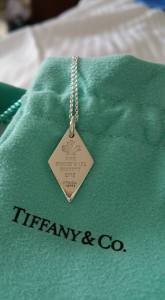 It was still raining when I finished so I needed dry layers. I had checked a bag at the gear check which seemed like a good idea at the time but the gear check was on the opposite side of the course from the finish so you had to play Frogger through the runners to get across the course and get your gear!

My partners in crime had started in waves further back so they were still running. I waited in the rain and was very impressed to note that they still had heat sheets (remarkable planning they must have given out more sheets than they had runners). I did not get a heat sheet but I did get a very large, high quality recycling bag! (much better than a normal garbage bag).

By the time everyone was done we were pretty chilly and a bit alarmed when we arrived at the ferry and found ourselves behind the 90 minute wait sign but they obviously added more boats because we waited less than an hour. I was amused by the boat announcements on the way back they had not changed them from the way out so we were all encouraged to do our best on our big day!

Overall this is a great event. I hope they do it again next year. I said one and done but I might go back. The pictures were free too. Ironically I received an email with the link to my free Nike pictures and an email from Marathon Photo with Boston Marathon photos who charge $29.95 US for ONE digital download about an hour apart.