Sunday is bike day in Quito. They close down many of the streets in the old town and the entire length of Avenida Amazonas, almost 30 km from 8am until 2pm. This was something we had to do. There was only one problem we needed bikes. We set out on Sunday morning and discovered that not only were the roads closed there were water stops and bike repair stations as well.

Harold used his non-existent Spanish and some hand gestures to learn from the bike techs at the first tent that the tent a km up the road might have bikes for rent.

We followed the cyclists and sure enough the next repair station also rented bikes. We had to leave two pieces of ID each, we could only come up with three between us but we managed to rent the bikes anyway. The price was $2.50 per bike per hour. The bikes had seen better days but they were basically functional. 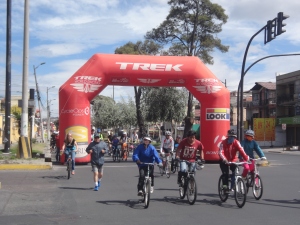 We rode along from the old town to the new town (La Mariscal) which although it is still very Ecuador is much more North America than old town. We saw Subway, KFC, and even a McDonalds. 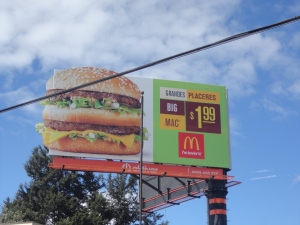 There were lots of local residents taking advantage of the closed roads. We rode up and down and around a large park which was full of families enjoying the sun.

We returned the bikes and realized we had half a day left so we walked to the cathedral with the intention of going in but as we were walking up a band arrived. They were playing while standing in the back of a truck.

They stopped in front of the church and a group of dancers in traditional clothing joined them. They carried two litters with religious scenes up onto the church steps. The band played and the group danced. There was one man in drag and a couple of men in elaborate costumes. I have yet to figure it out but they were not doing it for money and it was obviously celebratory. The fully costumed men reminded me of Fastnacht celebrations in Germany. 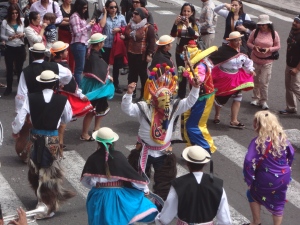 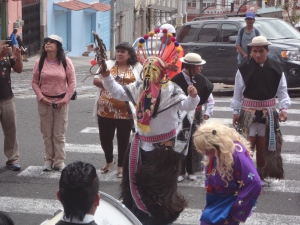 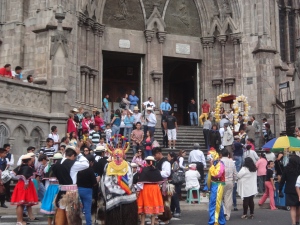 With a few hours of daylight left we went to a bus station two stops from the one we had used the day before and headed back to the end of the line. From there we took a second local bus to la mitad del mundo (the equator). The two bus trip took about 1 1/2 hours and cost us $0.25 for the first bus and &0.20 on the way out and $0.40 on the way back (we think that was a change issue). We had to stand all the way there and it was pretty crowded but that was part of the adventure.

When the bus gets to the “official” equator (which is actually off by about 200m) if does not stop but that is where everyone wants to go so there was a general uproar in the bus and we stopped just down the street.

We walked up to the official equator which is more like a small amusement park and I lined up to buy tickets while Harold went to buy water. There were a number of English speaking tourists in line. There were serval different prices and packages available we wanted the cheapest which was either $3.00 or $3.50 we assumed it would be $3.50 because it is not uncommon for attractions in Ecuador to have two prices one for locals and a higher one for tourists. It was $3.00 so the $3.50 remains a mystery. The middle of the earth has many restaurants and gift shops selling local crafts. We stopped for a fruit salad with yogurt and were pleasantly surprised that it was only $2.00. We were also surprised that the woman selling it only spoke English!

We took silly pictures and visited the lamas then we headed back to try and catch a bus home. 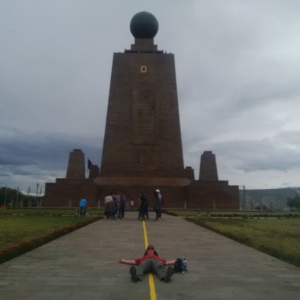 This was exciting because we were not sure which bus to take or where it stopped. We did find an official bus stop but a bus stopped for us before we got there (buses in Ecuador generally stop or at least slow down if you stand by the road and wave). They were yelling “Quito, Quito, Quito” so we got on. We had to stand again but that’s what you get for $0.20.

When we arrived back at the local station we set off once again in search of food. The woman we rented the apartment from had told us there was a big grocery store a few blocks away but we had not been able to find it. We did see people walking down the street with yellow bags with groceries in them. On the way back from the bus we started following the yellow bags backwards. Every time we saw someone with a bag we went the way they had come. Sure enough we found the store! Another successful day.