After going down the Grand Canyon it only seamed logical to go up Humphreys Peak, the highest peak in Arizona at 12637ft. The peak is reached via Humphreys Trail a straight forward 7.7km path which starts in the Arizona Snowbowl parking lot. The trailhead is at an elevation of over 9000 ft. and the area above 11,500ft is the only area of tundra in Arizona.

Our poor little rental car did not enjoy the trip but we made it. The trail starts with an easy walk through golden fields and then open forest. 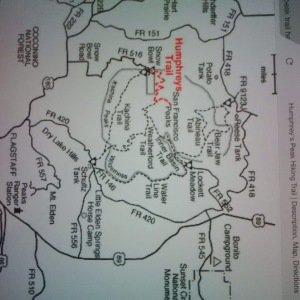 We were not alone. We passed a father and son team, a group of university students and two women sitting on a log eating Chetos in the early part of the hike. We were also passed by a couple of fit looking groups.

It was windy in the parking lot (in hindsight that should have been our first clue) and as we got higher up the peak it got colder and the wind got stronger. A couple of groups that were coming back down passed us and they all said “it’s really windy up there” (clue number two). We were relatively well prepared considering that we were in Arizona. We had hats, gloves and down jackets which was certainly more than some of the other people we saw had.

When we reached the tree line at 11,500 ft it went from windy to howling gale and as we crossed the ridge of false summits it got worse. We put on everything we owned and proceeded to cross the ridge. We were surrounded by a cloud and the wind was so cold and so strong that the moisture in the cloud froze on everything it came into contact with (rime). At one point the clip on one of my three section hiking poles came open the section slipped down. When I tried to fix it everything had frozen solid so I had to leave it. There was almost no visablity so we navigated slowly from marker to marker. The gusts of wind were so strong that we had to crawl from bolder to bolder because the wind was actually knocking us off our feet. After 20 or 30 minutes of this I was really starting to ask myself why I was doing this. At this point I would have been lying if I said I was having fun. We could not see the summit so we did not really know how far we had left to go. I was crouching behind a bolder and Harold was 15 or 20 feet ahead. We did a slight change of angle and the wind picked up again. The summit then became visible about 20 feet ahead. Harold crawled up to it. I started up but even crawling the wind was pushing me over. I had had enough so I hung out behind my bolder and called it close enough!

We made it back down safely and as an added bonus the rental car made it safely back to Pheonix.