The meet was held in Jean Drapeau Park, all outdoors and the weather was pretty co-operative although shade was at a premium. There were three pools for the swimming events all 50m. Two were together the third was about 1 km away. It was temporary, a full size, 50m, 10 lane temporary pool all above ground. Expensive and not hugely popular with Montreal tax payers but swimming in it was much like swimming in any other pool.

On the weekend I was there Heavy Montreal was being held between the two pools. It was pretty easy to play spot the swimmer vs spot the heavy metal fan on the subway and when we walked by the concert area we had to avoid taking any deep breaths in order to avoid possible anti-doping violations.

I only swam one in-pool event and that was the 400m free which was held in the temporary pool. There was a warm up pool but it was 1km away, the temperature was pushing 30C and there was very little shade. The other complication was that, as with all swim meets, the heat times were approximate so you never knew exactly when you would be swimming. I did warm up but it was an hour before the event, followed by the 1km walk to the pool and a flop in the shade to avoid the heat.

Not my fastest 400 ever but I was there for the experience and I did what coach Bill said and was sure to beat the women in the lanes beside me.

I have spent a fair bit of time at Ironman events over the last couple of years. At Ironman events there is a tent front and center where you can buy Ironman everything, Ironman shirts, Ironman key chains, Ironman watches, Ironman bumper stickers and even Ironman underwear. This was obviously not an Ironman event there was one Speedo tent with a few items and all the remaining clothing was extra large. I did buy a backpack, I had to have something. 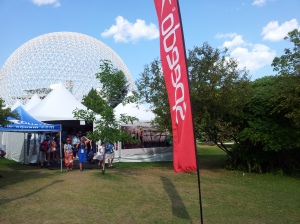 On day two I swam the 3k open water swim which was held in the Olympic rowing basin: Lots of space, very little chop and you can sight off the shoreline. There were over 150 swimmers in my age group so we were divided into two waves to prevent crowding. This was a little shocking to me as my open water swim experience comes primarily from triathlon and goes back to the old days in Lake Placid with 2500 swimmers trying to drown each other in a mass start.

Swimming is obviously a gentlemans sport either that or a vicious one because we were not allowed to wear any jewelry including wedding rings and our finger nails were inspected before we were allowed into the water to make sure they were not too long. I had to cut mine twice!

The swim its self was pretty uneventful no contact at all and the only excitement was the woman behind me who managed to miss the turn bouy completely quite an achievement on a course that only had one turn to worry about.

Overall it was fun to see so many people from so far away competing together. Some of the older athletes (90+) are truly inspirational and watching a large group of world travellers get excitied about a groundhog gives you a new perspective on all the things we take for granted.